With almost suddenness the death took place on Sunday morning of Mr. John James Butler, at "Quarry Lodge, Hastings, at the age of 63.  Up to the preceding tuesday Mr. Butler had been in his usual good state of health, although the loss of his son in the War last September had a marked effect upon him.  On the Tuesday he contracted a heavy cold, which reapidly developed into pneumonia, and, despite all that medical skill could do, he passed away at midnight on Sunday.

Mr. Butler - "J.J.," as he liked to be called, commenced business for himself in All Saints-street as a grocer, after serving time with Mr. Rubie.  It was not long however, before he changed his business, and started the well-known "Butler's Emporium" in George=street, which his energy and business tact soon made famous throughout the town and East Sussex.  So successful was he that he was enable to retire some five years agao and his greatest pleasures during the past few years were the cultivation of his garden, photography, travel, and the game of bowls.  He gave several lectures upon his lectures abroad, illustrated by his photographs.  In the Summer time he was a familiar figure on the bowling green, a game in which he took considerable interest.

He found time during his business career to serve one term as a Councillor on the Corporation.  He appeared as a candidate in a three-cornered fight, and won off hiw own bat, without the assistance of any kind of organisation.  He wrote a manifesto on brown paper and exhibited this in his window, and he was ablt to swear his expenses at under one shilling.  In the Council he was a thorough free lance, and one fo his accomplishments was the ladies' lavatory in the Fishmarket.  At the end of his term of office the late Mr. Butler did not gain re-election.  He was great as a rhymaster, and for many years every issue of the "Observer" contained a poetic advertisement relating to some special lines at his emporium.

Deceased was twice married, and leaves three sons and three daughters (all married) by his first wife, and a widow and stepson. 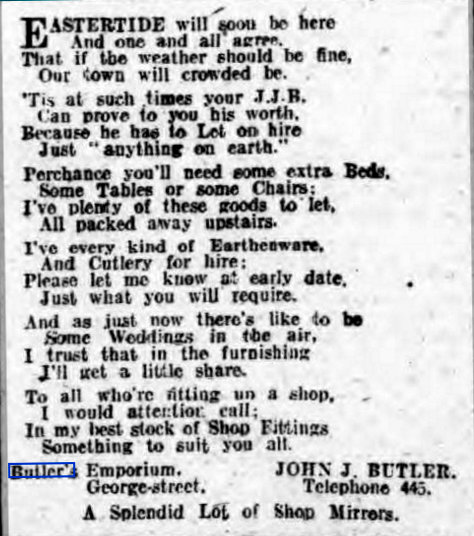