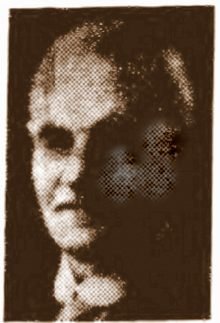 Hastings and St Leonards Observer - Saturday 25 February 1939
FOUNDED MOUNT PLEASANT CHURCH
Tributes to the Late Mr. Charles Chapman
BROTHERHOOD GUARD OF HONOUR
AT Mount Pleasant Congregational Church, of which he was one of the founders over 60 years ago, the funeral service took place Monday of Mr. Charles Chapman, who died his home, 95, Mount Pleasant-road, Hastings, on Wednesday last week, at the age of 87. [In the 1891 census they were living at 47 St Marys Road; Charlotte is not mentioned. Mr. Chapman was a well-known personality in the Mount Pleasant district, where he had lived for many years.  He had been ill for only a few days, and he was out doors the week prior to his death.  He was a native of Eastbourne, where he was educated and spent his youth.  In 1872 he was married to Miss Parker, of Tunbridge Wells, Speldhurst, Kent.  They came to Hastings the following year and founded the builder's business now known as Chapman Bros., Mount Pleasant-road.

Mr. Chapman was responsible for the erection of many houses in the St. Helen's road district.  He retired years ago and the business is now owned by two of his sons, Mr. C. and Mr. J. Chapman.  Another son- Mr. 8. F. Chapman, is an electrician in Hughenden road.   His wife died 11 years ago.  There are three sons and five daughters.

FUNERAL TRIBUTE ….. The minister referred to Mr. Chapman's long association with the church, and spoke of him as a friendly, kindly, charitable and lovable man whose passing would mourned many.  The interment followed at the Borough Cemetery.  The cortege was met at the entrance by a guard honour formed by a large number of members the Brotherhood, and many other friends, representing the various organisations with which Mr. Chapman was connected, were also present Sprigs of ivy were dropped into the grave by the Brotherhood members.

Although he never appeared in the  publlc eye, Mr. Chapman was extremely well known and his cheery smile won for him Innumerable friends in the town,

AN APPRECIATION The following appreciation of Mr. Chapman has been contributed:— Through the passing of Mr. Charles Chapman, the Mount Pleasant district, in which he resided for many years, has lost one of its most notable figures.  He had many friends, for he was endowed with a genial spirit which found expression even under the most trying circumstances. Surely he will be greatly missed.

Mount Pleasant Congregational Church will miss that geniality, for he had been a member for many years, coming to the church from Robertson-street Church, when the former was opened in 1878.  He, with Mrs. Chapman, attended the first communion service.  His name figured first upon the church roll, and his loyalty and devotion during the 60 years continued unabated.  Until failing health and advancing years overtook him, he was invariably present to welcome any stranger who came to church, although he was of a retiring and modest disposition.  Being elected a deacon of the church, he in course of time became the senior member, and as a further honour was chosen as the first life deacon.  This was an honour richly deserved because in many ways he assisted in promoting the good work of the church.

Though at conferences and deliberations he seldom had much to say, his remarks, when occasion demanded, were always to the point and evinced the practical advice gained by a life of experience in business affairs.   The church owes much to his thought and advice regarding the care and upkeep of the premises.

lt was always a pleasure to be associated with him because of his kindly nature. 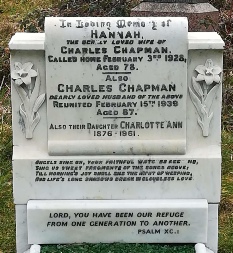 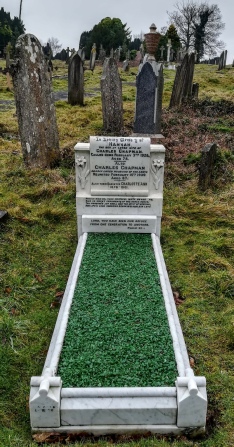 Angles sing on your faithful watches keeping,
Sing us sweet fragments of the songs above,
Till morning's joy shall end the night of weeping
And life’s long shadows break in cloudless love.

Lord you have been our refuge from one generation to another Pslm. VCI