Honoured as a citizen,

Beloved as a man,

During a long and strenuous life

He served his day and generation

In many important branches of

His aim was to elevate the moral

and intellectual character of his

In recognition of his unselfish work and nature

Some of his friends have united

To raise this simple monument 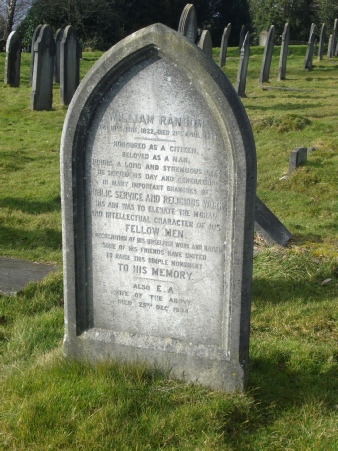 His wife was Eliza Arabella Sanderson, known as Bella, (1846-1934).  She had been Barbara Bodichon’s companion-housekeeper from 1880 to Barbara's death in 1891.  Weeks later William and Eliza married and moved to Githa Road.  They were both women's rights activists and they founded the Women's Liberal Federation, and Bella became its secretary.

Bella left Hastings in 1929, aged 83, and moved to Bolsover, Derbyshire, near her birthplace. She died at home on Christmas Day 1934 and her remains were brought back to Hastings, where she was buried in William’s grave.

[Thanks to Helena Wojtczak for this information.]

The Will of Willam Ransom (Journalist)
This is the last will and testament of me, William Ransom, of 13 Githa Road, Clive Vale, Hastings, in the County of Sussex, Jounalist. I devise and bequeath all the real and personal estate to which I shall be entitled at the time of my death unto my dear wife Eliza Arabella Ransom, absolutely.  And I appoint my said wife executrix of this my will.

In witness whereof I, the said William Ransom, have to this my last will and testament set my hand this eighth day of July in the year of our Lord One thousand eight hundred and ninety seven. ---William Ransom.