Death on 21 April of William Ransom, father of the local press.  He died at his residence at 13 Githa Road, Clive Vale.

He was the founder and first editor of the Hastings and St Leonards News, first published on May 5th 1848, the first long-living Hastings newspaper, and the model of those to come.   Aged 83.

He was helped by his father William (died November 1855) and then his uncle John until the selling of the News in 1870. William remained editor until 1884.  After that he contributed much material to the News and the Mail.  He was a strong Liberal, greatly helping the local party.

The " News " was the first essentially local paper that lived.  Its first issue was dated May 5th, 1848, the quantity, four pages, four columns each. The newspaper stamp was then compulsory, which was 3d., making the actual price of the paper 2d.

His father, William Ransom, was from Battle and came to Hastings in 1818/9, setting up a printing and publishing business somewhere in George Street in 1819.  This was where he also ived, and his children were born there. It is known that in 1835 he was living at 59 George Street, with his business at number 60.  In December 1838 the Ransoms moved their home and printworks into the new building, No 42 George Street.

William Jnr’s parents were described as ‘a perfect type of the English race, plain, homely people, and having no “humbug”, … both church people’.  His mother Mary died on Christmas Day 1868,aged 69, and her obituary said that she was ‘a type of the good old English wife and mother whose whole soul was devoted to the religious idea of selfsacrifice for others’ good’.

William Jnr attended a private school and then, at 13, started work in his 42 George Street, his father’s printing office. He read widely, and while still a teenager he joined the influential Hastings Mechanics Institution and became a lay preacher for the Wesleyans.

William Jnr tried to produce the News single-handed from May 1848, from the family printworks at 42 George Street. It was published on Fridays.   The Cinque Ports Chronicle had been printed for 18 months by William Snr at No 42, and the News was modelled on it, being similar in size and style.

But the younger William suffered poor health and this, combined with the heavy workload, forced him to hand over production to his father in late July 1848. William Jnr continued as editor until serious illness meant he had to suspend the paper temporarily during November and December 1848.

The launch of the Hastings & St Leonards News on 5 May 1848 was a landmark in the history of the Hastings papers.  The News was the first real local paper that survived any length of time, and not only survived but flourished. It was lively and progressive, and set journalistic standards that serious future rivals had to match.  The News was a new paper in a new town, at a time of expansion and optimism. Its strong support for the Liberals both reflected and aided the general feeling of progress in Hastings until the 1870s.

William often wore a clerical-looking hat, collar and stock. He lived at 7 Wellington Terrace, behind Wellington Square, for many years, although he seemed to feel that his home was Clive Vale, where he lived later in life, at 13 Githa Road. After retiring in 1884 William continued writing regular campaigning columns, stories and letters for the News, and later for other Liberal papers.

A group of local men willing to take up arms against the French was launched.

William Ransom gave Barbara Leigh Smith (later Bodichon) the opportunity to get her radical ideas into print by allowing her to write women's emancipation articles for his newspaper, including An Appeal to the Inhabitants of Hastings, written under the pen name of 'Esculapius'.

"Barbara's first opportunity for expressing her opinions more publicly was given to her in 1848 by William Ransom, a remarkable young man of twenty-six who was editor of the Hastings & St Leonards News.  Liberal in politics, a supporter of free trade, he was the great champion of Frederick North....  By the time he died Ransom was considered even by rival newspapers, as the father of the local press.”

He became a friend for life.  In her will Barbara left him £50 a year.

12 September 1874 - Hastings and St Leonards Observer
WHY AM I A LIBERAL ?
Lecture by Mr. William Ransom Last Night.  " Why I a Liberal ?" was the title of a lecture delivered in Mr. Tanner's Schoolroom, in All Saints' street, yesterday (Friday), by Mr. William Ransom, in the presence a numerous audience.

His quote on St Andrews archway ‘a dungeon-like railway arch  which casts a gloom over one of the prettiest spots in Hastings’, 1882. 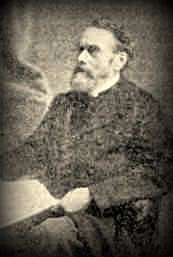