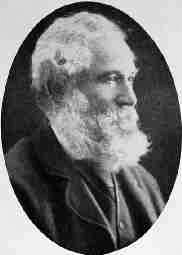 Described by an acquaintance as ‘not only a schoolmaster, but willing to engage in anything from smuggling to land surveying’ he appealed (in a 6 line poem) for trees to be planted around the cricket ground in 1865, in later years he staged an annual school event on the Central Cricket Ground, such as the siege of Gibraltar, the story of the Armada, using model ships, in his ‘first lesson in hydrostatics’ he taught the technique of diluting smuggled spirits until reaching proper strength, indicated by floating numbered glass beads, and in 1864 advertised himself as “ land surveyor, writing master and accountant, lectures on astronomy and electricity, at ‘Bleak House’”.

John Banks, known as “The Old Schoolmaster” was born in Russell Court, just off George Street in 1807, his father was a blacksmith, who worked hard and drank hard but took care that all his children benefited from as good an education as could be got in the schools of that day. Banks tells us that his father had added to his income by acting as a “looker-out” for the smugglers and had often assisted them. Their house, (since demolished), had a large oven, a large closet in one of the bedrooms, and a disused pigsty in the backyard with an excavation under it which were used to conceal smuggled goods.

n 1844, Banks became second master at the new Hastings Proprietary Grammar School in Hill Street.  Four years later he was appointed to the mastership of Parker’s stayed there for 30 years until the school was reorganised.  He saved and eventually built a new school, ‘Bleak House’, in Stonefield Road (the building is still there at the top of Portland Steps) and raised Parker’s to a very high standard of respect in the town and his teaching of navigation was well-known.

Early in 1878 Parker’s, Saunders’ and part of the Magdalen Charities amalgamated under the name of the Hastings Grammar School and their first action was to arrange for the retirement of the old schoolmaster, John Banks, on a pension.  Banks’ many outside interests included land surveying and from 1833 onwards he was kept busy producing a large number of maps and plans of the town required by the Improvement Act of 1832.

For many years he kept the weekly weather record that was printed in the local paper and recorded one of the wettest days in the history of the town (June 28th, 1861) when over 2 inches (over 50mm) of rain fell and parts of the town were flooded.

The Hastings Mechanics’ Institution opened in 1834 and Banks was involved with it for the rest of his life, on the committee, for a long period as secretary and also as president.  He lectured on all manner of scientific subjects from chemistry to astronomy. “Without the least pretension to eloquence or finished rhetoric, he stands before his audience a plain-speaking man, thoroughly understanding his subject and telling his hearers in plain Saxon what he knows”.

He formed the first local museum although the contents were later dispersed.  He took part in the early days of a similar institute at St. Leonards, and helped to arrange an exhibition of works of art and models of inventions at the St. Leonards Assembly Rooms in 1853 (The Masonic Hall) that included many of his own exhibits and diagrams.

When the Hastings Philosophical Society was formed in 1858 Banks was one of the founder members and no local scientific gathering would have been complete without him, he had supported the Volunteer movement from its formation in 1852 and became Band Major in the Hastings Rifles.

His knowledge of accountancy found him in demand as auditor by many local companies, while he acted as actuary to the Hastings Savings Bank until it was absorbed by the Post Office Savings Bank and auditor to the Pier Company.

He died at his home on June 3rd, 1882, after fitting generations of Hastings boys to take their places in the world.  His whole life had been spent in the town, and all the local papers lamented his passing with affection.

(With thanks to Ion Castro for much of this information.)