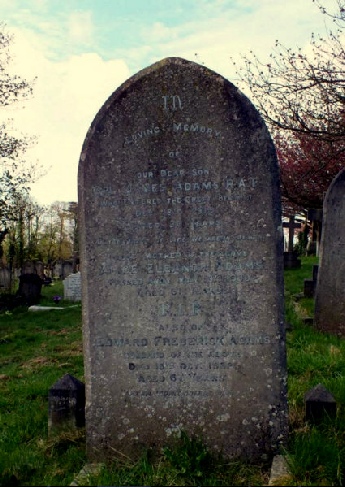 It is hard to read further, but also buried in this plot and remembered on the memorial,  are his Mother, Alice Eleanor Adams, who died in May 1930 aged 61, and his Father, Edward Frederick Adams, a fisherman, who died in October, 1932, aged 67.

In 1891 Edward and Alice with living with their first daughter at 1 Albert Cottages.  In the 1911 Census, James, his parents and 5 siblings, were living at 4 Crown Cottages, Crown Lane.  They had ten children and the cottage had 5 rooms. His father a fisherman and James a Fisher lad.

"In the midst of life we are in death." From Mum, Dad, Sisters and Brothers.