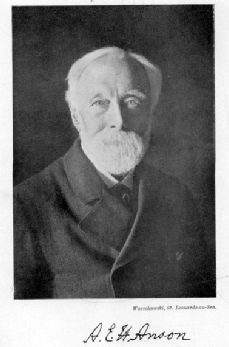 It is not possible to read the inscription on her tomb.

Some sources give Sir Archibald’s surname as Harbord - Anson

Archibald Anson born at 32 Devonshire Place, London, the youngest son of Major-General Sir William Anson, 1st Baronet.  His mother was from the Dickenson family.  He had three brothers and three sisters, one of whom was his twin sister Louisa Frances Maria.  He was taught Latin grammar by his father before he went to school.  In 1834 he went to Reverend Dr. Pincknay School and later in 1837 to Mr. Miller's school on Woolwich Common.

[His son, Archibald John George, became Hastings lifeboat honorary secretary in 1916.  He was living at ‘Penang’, Markwick Gardens, in 1920, and his widow was still there in 1931.]

Anson married secondly on 15 May 1906 to Isabelle Jane Armistead (who died 11 May 1923), daughter of Robert Armistead of Dunscar, Lancashire.

Anson's military experience began from 1844 to 1847 in England, Ireland and Scotland from 1847–1855, Mauritius, 1857–1862 and Madagascar 1862-1865.  He returned to England and was appointed as the last Lieutenant Governor of Penang from 1867 to 1882, after serving in the army in India.  In his memoirs About Others and Myself he describes the feeling of depression upon his appointment as Penang's Resident Councillor.