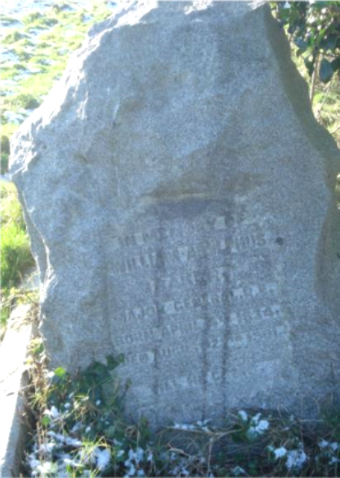 He was the son of Captain William Way Baker and his wife Barbara. There is a Frances Baker buried in EL A16 - is there a connection?

There is a record of his marriage when he was in the Bombay Engineers, to Jennie [?] Lisette Henrietta, daughter of the late U Pockels MD, Physician to the Duke of Brunswick at Karachi. They were married on 8th August 1858 at Karachi.

In 1865 he wrote "The Day and the Hour or Notes on Prophecy : A Sketch of the Future, Extracted from the future (see next page)

The Cathedral & John Connon School - c.1860
Lt Col WA Baker, R.E. [This was a later rank] and undersecretary to the Government, replied in two weeks, offering the preferred site of 1,780 square yards, but with a caveat: “…only if a building suitable to such a prominent position can be designed for the sum available.” He added that, if the school was ultimately to become a college, the building was to be designed accordingly, with just a small portion built to suit the requirements of a high school. He ensured Rs 25,000 was provided immediately as part of the endowment fund, sufficient for the foundation. The rest would be provided “contingent on the design.”

Transcactions of The Bombay Georgraphical Society
Third Meeting. January 16A, 1868
Several donations to the Library were announced, for which the best thanks of the Society were voted to the donors. Among the several letters reaised were the following :1. From Captain W. A. Baker, R. E., Acting Under Secretary to Government, Public Works Department, conveying the resolution of Government directing the Chief Engineer, Presidency Division, to supply the maps called for by the Society

Council House - Poona - "An estimate for roads, metalling and draining the grounds was sanctioned on March 10, 1870 by the then undersecretary to the government, W A Baker.

5th February 1877.
Resolution of Government in the Military Department, No. 387, dated 31st January 1877.
Reviews report of the Sanitary Commissioner on the sanitary condition of the canton-ment of Sholápur.
RESOLUTION.—A copy to be communicated to the Superintending Engineer,Central Division, for information.
W. A. BAKER, Lieut.-Colonel, R.E.,
Under Secretary to Government.

Hastings and St Leonards Observer, 7 Sep 1901
THE LATE GENERAL BAKER. The demise of Major-General William Adolphus Baker, R.E., Maze Hill-terrace, St. Leonards, was announced in our last issue. The deceased gentleman had seen considerable service in India. At one time he was Under - Secretary to the Government .......