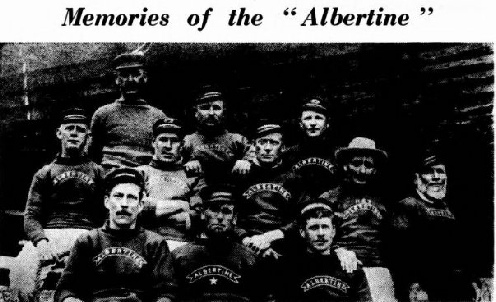 Hastings and St Leonards Observer - Saturday 24 July 1909
DANGER SPOT. WHERE IS THE CORPORATION MAN?
We constantly hear of children falling into the deep pool at the end of the stone water pipe near the Queen's Hotel. The boatmen have made numerous rescues, and some children have narrowly escaped drowning. The pool caused by the outflow of water very deep.

Captain Dick Ball, of the New Albertine, yesterday received the following letter from Mr. Edwin H. Greeby. 232. Ardgowan-road. Hither : —"Dear Captain Dick, —You will doubtless remember when I was down at Hastings with my wife and little girl a few days when Fred and you fished my little Minnie out of the water at the end of the pipe. I told you I had taken the matter up with the Hastings Council, and thought, perhaps, you would like to know that I have received a letter from the Town Clerk, in which he tells me that the Committee has given instructions for a man to stationed near the hole to warn the children of the danger at such time as it is necessary.  I hope the Council will doas  they tell me."

Yesterday (Friday) morning boatman effected another rescue at the spot. The Corporation man, according to the boatman, has not yet been seen.  Captain Ball and his men hope to be busy for several weeks, and with boatmen employed, unfortunate children who fall into the pool will be at great risk.

Hastings and St Leonards Observer - Saturday 27 July 1929
One the beet known of old Hastings characters, Mr. Richard Joseph Ball, for many years skipper of the yacht " Albertine," has died 51, Percy-road, Ore, at ago years At one time an accomplished oarsman, he was among the star competitors in local regattas, and gained numerous prizes. As skipper of the "Albertine," he became a popular figure with thousands of visitors, running trips daily from off' the Harold-place.

A native of the Old Town, .Mr. Bull lived there practically all his life,and only recently moved Percy-road.

The funeral took place last Saturday the Borough Cemetery, the first part the service being held at All Saints' Church.

Hastings and St Leonards Observer - Saturday 22 July 1933
The Late Mrs Ball - the death occurred on Friday last week of Mrs. Eliza Ball, at her home, 51 Percy-road, Hastings, at the age of 77 years.  Mrs. Ball was very well known in Hastings, having resided for the greater part of her life in the Old Town.  She was the widow of the late Captain Dick Ball (of the "Albertine” ), who pre-deceased her, four years ago.  The funeral took place on Thursday, the first part of the All Saints' Church being conducted the Rector, the Rev. E. A. Penson.

Hastings and St Leonards Observer - Saturday 18 January 1936
Biddy has been "tubbing" for 45 years, but he was not the first Hastings tubman.  Dick Ball and a colleague known as "Fathead", members of the old " Albertine" crew, used to out in tubs before he started his career, but they did not try any the acrobatic tricks that have made Biddy so popular with the holiday-makers.