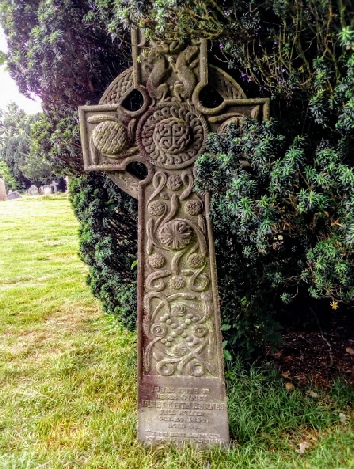 In the faith of

"Thou hast delivered
My soul from death."

Her brother, Keith Henry Barnes, the Rector at Cattistock,  was responsible for the installation of a 35-bell carillon, unfortunately destroyed by fire in 1940.  There is a plaque honouring them both. [See below]

Also of Janet Keith Barnes, his sister, who died Oct 24 1899.  She, in addition to many valuable gifts to the church, furnished and deocorated the Baptistery, and by her will provided for the maintenance of the Carillon.”

In a list of the bell givers Janet’s reads:
Mark well the passing hour, | the tolling Bell | life's end doth tell. | To the Glory of God. | Severin van Aerschodt cast me the Tenor of a peal of eight, | at Louvain, and JANET KEITH BARNES gave me to the Church | of S. S. Peter and Paul, Cattistock, 1872.

The Guardian,December 6, 1899
Miss Janet Keith Barnes, of St. Catherine’s, Horndean, Southampton, who died on October 24th, aged sixty-six, bequeathed to the trustees of Cattistock Church, Dorsetshire, 1,000J. in trust, to expend the income thereof in the maintenance and repair of the carillon at Cattistock, and she directed that a sum of 140L in the testatrix 's hands, collected on behalf of the Carillon Fund, should be paid over to the trustees.  She left 501 , in addition, for a keyboard, and lOOl. for furnishing and decorating the baptistry of Cattistock Church.

She bequeathed to the Additional Curates Society 4001..- to the Chichester Diocesan Clergy Sustentation Fund for charitable uses, 200l. ; to the House of Peace at Plymouth, 2001.; to the Ladies' Charity School, Queen's-square, the Brompton Hospital for Consumption, the Society for the Propagation of the Gospel, the Vaughan Memorial at Christ Church, and to the rector of Christ Church, St. Leonards-on-Sea, for the benefit of the schools of Christ Church, each 100L ; to the Waifs and Strays Society and to the Haggerston Sisterhood, for the benefit'of their work in London, each 60L

Income for maintenance and repair of the carillon at Cattistock.  Surplus income for the benefit of any matter or thing in connection with the parish church of Cattistock.

There is some information at http://www.manfamily.org/PDFs/Sheldon%20Craddock%20and%20his%20successors%20for%20the%20internet.pdf

BARNES, Janet K,  is a visitor in London Road, aged 58 living on her own means. She was born in Marylebone.  Her maid, Rose Woolgar was with her.

Remembered on a family memorial at Cattistock:

“And of their grandchildren JANET KEITH died

of KEITH and ELIZABETH BARNES. 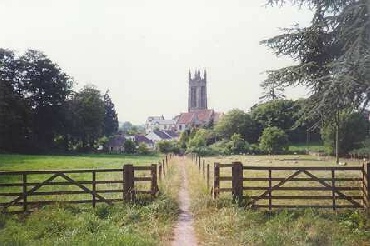 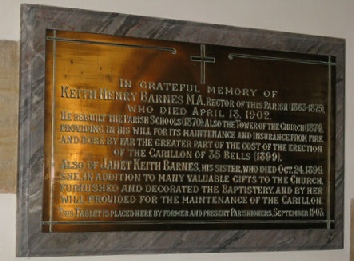