Who gave his life for his country

And of his wife

Lovely to know when she

They were waiting for her

On the other side.

Edward was born on 21st January 1879 in St Leonards. He joined the Royal Navy on 21st January 1897 on his 18th birthday.  He was 5’2’’ tall with brown hair and eyes and a fair complexion.  He served in the Navy on a wide variety of ships beginning with HMS St Vincent and ending with HMS Wildfire, rising to the rank of Chief Petty Officer, until he was due for demobilisation in July 1919.

He seems to have received a pension as well for his years of service.  However he then decided to join the new Coastguard Force which he did on 15th August 1919.  It was whilst serving with the coastguards that he died on 5th March 1925 at the Lulworth Cove Signal Station at the age of 46, which apparently formed part of the Royal Naval Dockyard at Portland. His death was registered at Wareham.

Edward’s parents seem to have come to Hastings from the north of England.  In the 1881 census a William Barthram (born 1845 in Stokesley Yorkshire) and his wife Sarah (born 1852  Newcastle, Northumberland) were living at 3 Alton Buildings, Caves Road, St Leonards.  He was a bricklayer. There were 3 children, the eldest, Sarah, was born in Chelsea and Edward and his brother William had been born in St Leonards.

In 1891 the family were still living in the same area, at 12 Old Market Street, although William’s wife was now called Elizabeth, while having the same birth date and place as the Sarah mentioned before.  There were now four children. Ada (again previously called Sarah but with same birth date and place) was a porter in a laundry, Edward was a plumber’s apprentice and William and Ellen were at school.  The family also shared the house with Robert and Elizabeth Wilson.

By 1901 William had died and his widow Sarah Elizabeth was living with her daughter Sarah Ada Hook and her two children Ada and Mabel Hook at 12 Clifton Rd.  Also living with them were William who was a railway engine fireman and Ellen who worked in a laundry as did her mother. Edward was already in the Navy. He married Florence Emily Bryant, possibly from Rye, in Hastings in 1909. It was she who posted the obituary notice in the Hastings Observer of 21st March 1925. Two cousins Nellie and Edgar posted an affectionate memorial notice the following year.

Florence Emily Barthram died in Hastings in 1950 at the age of 70. 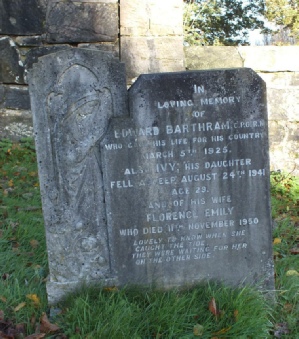