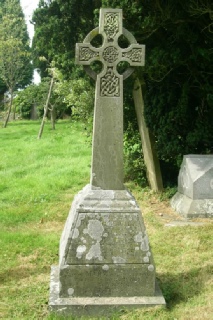 A life long worker in the Masters Service
and an earnest advocate in the temperance cause.

Richard Beagley was born at East Tilsford, Hampshire and in 1851 was working as a schoolmaster there with his cousin Jane Beagley as the schoolmistress.

By the time of the 1871 Census he was living in Hastings at 11 Church Road, with his wife Mary and niece Frances Hellis. They had 2 servants.

From 1854-7 Richard Beagley ran a library at 2 Eversfield Place with Joseph Elijah Butler, known as Butler & Beagley.  Butler was a librarian and one of 7 trustees who founded the Silverhill Chapel in 1853.  The Local directory of 1867-8

From 1876 until his death Richard Beagley was a House, Land & Estate Agent working first from 4 London Road and later at 59 London Road, St Leonards where the architect H. Tree also had offices.

Both Richard and Mary were involved in the temperance movement in Hastings, Richard was secretary of the Temperance Hall & Working Men’s Institute, Norman Road West, in 1864 & 1874.  Mrs Beagley was amongst the helpers at the Christmas Festival at the Norman Road West Temperance Hall providing “stalls of useful and ornamental articles” held on 27th & 28th December 1864.

“An address on Total Abstinence was delivered on 10th June to St Leonards Band of Hope (chiefly conducted by Richard Beagley) by the popular temperance advocate the Rev J B Smythe of Dublin”. Bretts History

Richard Beagley was a superintendent at St Leonards National School and a close friend of Frederick John How a teacher there.  When How died in 1887, a few months before Beagley, he bequeathed £2,000 to provide an annual sum of £60 to the Hastings Grammar School to create the Richard Beagley Scholarship in his memory.  The scholarship was for the benefit of boys who had been educated at Hastings Grammar School for at least 3 years. Any surplus was to purchase gold & silver medals to “encourage perseverance by the students”, after 1924 the medals were replaced by books. Baines: History of Hastings Grammar School. Hastings & St Leonards News Oct 14th 1887