Sacred to the memory

Also of their three children

Who died in infancy

Also of their youngest son

This memorial is erected by their surviving children

Also in proud and loving memory of William Crabbe Beck

Eldest son of Frederick & Honor Beck & First Grandchild of the above

And who is buried on the Mount of Olives

And of Kate Ethel Beck

William Coker Beck (born 1836) and Jane Beck(born 1836) on whose grave William Crabbe Beck is remembered, were his grandparents.  In 1851 at the age of 16 William senior was living with his widowed mother, who was a baker, at 5 London Rd.  He was described as a miller.  By 1871 he was living at London Rd Ore with his wife, eight children, an elderly uncle and one servant.  He was described as a miller employing three men.

By 1881 the family is living at 136 Mount Pleasant Rd and William senior was no longer a baker.  He was described as Assistant Overseer (Municipal) Ore.  By now there were 11 children.  In 1891 they were living at 33 Elphinstone Rd and he held various municipal clerkships – he was clerk to the Ore School Board and Assistant Clerk to the Board of Guardians.  He was buried in the Non-Conformist section of the cemetery.

William Crabbe Beck was a Major in the Royal Field Artillery (Territorial Force) "C" Bty. 301st Brigade.  He was killed in action in Palestine on 28/3/1918 at the age of 29 and is buried in the Jerusalem War Cemetery.  He was mentioned in Dispatches.

He had a long association with the military as the following references show.

11th County of London (Howitzer) Battery, 4th London (Howitzer) Brigade; the under-mentioned officers, from the 2nd Kent Royal Garrison Artillery (Volunteers), are appointed to the battery, with rank and precedence as in the Volunteer Force. 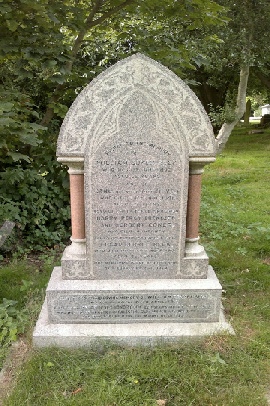