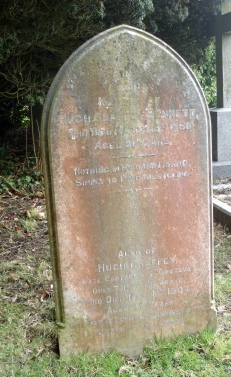 "Nothing in my hand I bring,
Simply to Thy cross I cling"

"Ever in loving memory"

Hugh Chaffey Bennett was born in 1838 in Thorncombe, Dorset

He married  Maria POOLE on 05 Jun 1865 in Bathealton, Somerset

He is listed in the 1871 census living in Cornwall, where he is an innkeeper and farmer, living with his wife and their two children, Hugh Chaffey junior and Emily Poole.

Also resident were his sister, brother-in-law, four servants and a traveller.

The Bankruptcy Act, 1869.  ln the County Court of Devonshire, holden at Barnstaple.

In the Matter of Proceedings for Liquidation by Arrangement or Composition with Creditors, instituted by Hugh Chaffey Bennett, of Stratton, in the county of Cornwall, Hotel Keeper and Farmer.

NOTICE is hereby given, that a Second General Meeting of the creditors of the above-named person has been summoned to be held at the offices of Mr. Richard Incledon Bencraft, Bridge Hall-chambers, Barnstaple, on the' 20th day of November, 1874, at eleven o'clock in.the forenoon precisely.— Dated this llth day of November, 1874.

R. I. BENCRAFT, Attorney for the said Hugh Chaffey Bennett

1891 census shows his widow at 25 Eversfield Place, Hastings.  Emily, aged 23 is living with her, and there is a ‘lady help’ and two servants.

Hugh Chaffey BENNETT the younger was born in 1866 in Bradford on Avon, Wiltshire.  He married  Louisa BABBAGE in 1898 in Bridgewater, Somerset.  (Before this, he was involved in a writ for breach of promise.  See p.2)

In the 1901 Census they are living in Lambeth, and his occupation is shown as Master Mariner R.N. Reserve

Hugh Chaffey Bennett junior was the Captain of the SS Orotava according to his memorial.  (For a possible explanation,  See p.2)

A record of Mariners and ships in Australian Waters, 27th March, 1885, lists as crew on the Port Adelaide, sailing from the Port of London to Sydney.

A report from Perim states that a heavy sea is running, and the s.s. Orotava has heeled seaward and is now bumping heavily.  The vessel has sprung a leak and her position is serious.  The steamer Ninto is removing the passengers and mails.  A message has been despatched to Aden for farther assistance.

In March 1897 The Mercury (Hobart) reported

The steamer Orotava is again afloat.  It has been found that her doublebottom keeps her water-tight, and she will, therefore, re-load her coals and cargo and proceed on her voyage with all possible despatch.

The following brief history of the S S Orotava does not mention the “the sinking of the British S.S. "OROTAVA," in the Tilbury Dock, Thames”

Orotava was built by Barrow Shipbuilding Co, and was launched in 1889 for the Liverpool-Valparaiso service of Pacific Steam Navigation Co. Orotava made two voyages in that service in 1889, and was then placed under Orient Line management for service from Liverpool to Australia via Suez. She made her first sailing in that service on 6 June 1890.