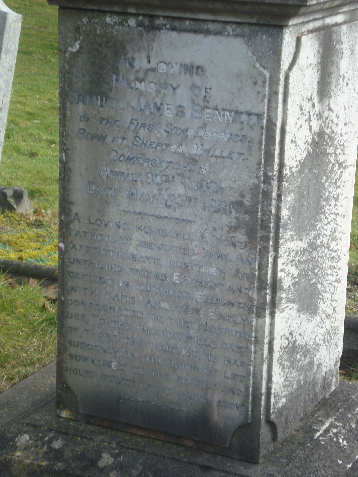 BB I02 - (A rather grand broken column with wreath on plinth)

‘A loving husband, a fond

father ,a devoted son. An

decisive in business. Endowed with rare

abilities. Early consecrated to the Master’s

use. To the inexpressible grief of those that

survive him he was suddenly in the noon of

his life summoned to the nearer and holier

service of the church above.’

Dr. Shaw, Hastings, and Dr. Stephen Yeldham, of London, were immediately summoned by telegram, but before they could reach Staplecross, Mr. Bennett had peacefully passed away, at a few minutes past nine o'clock.

DEATH GF MR. SAMUEL JAMES BENNETT. The remains of Mr. Samuel James Bennett, well known in local Nonconformist circles, were  interred a few days ago at the beautiful cemetery . ! at Ore, his last resting place being on the right of the central path beyond the chapel.  The following are some extracts of article on the deceased which appeared in the Commercial Gazette, of which , he was proprietor  - 