John Donald Merrett had been tried at Edinburgh for the murder of his mother, Bertha Merrett, and for uttering forged cheques upon her banking account.  The authorities at first believed that she had committed suicide, and no suspicion was raised for eight months.  Merrett was most skilfully defended, (Bernard Spilsbury appeared for the defence) and the jury returned a verdict of "Not Proven" on the charge of murder, and guilty of uttering.  He received a sentence of twelve months' imprisonment.

When he was released from prison he was befriended by a Mrs Mary Ann Bonar, who had known his mother in Edinburgh.  She contacted him when he was in prison out of sympathy.  He travelled southward to stay with her at the end of 1927.  She had a daughter, Isobel.

At Newcastle (England), John Donald Merritt (19) was sent to prison for nine months with hard labour for obtaining goods worth over £100 by false pretences. Vera Merritt (17), his wife, was placed in the dock along with him, but was discharged.

……….. His "wife, it was stated, is a daughter of a lady who was friendly with Mrs. Merritt.  Her family belongs to Gateshead. Scotland.

Great London Murders..... by Linda Stratmann, :, speaking of his time in Hastings " Under his new name of Ronald Chesney he quickly established a reputation in the town as a scoundrel with whom no respectable woman was safe."

In 1928 Mrs Bonar agreed to be guarantor on a hire purchase agreement for a motorcycle for Mr D.J. Chesney, the new name that Merrett had adopted for himself.

After proposing to her, Merrett and Isobel travelled northwards on the motorcycle he bought.

Wedding at Hanover Square Registry Office in London on 28 October 1930 between Thomas Chalmers Menzies and Mary A M Bonar
……  The groom arrived punctually in a taxi from Warwick Place to find the place besieged by spectators.  He had to wait 25 minutes for his bride.  She ‘was dressed in a picture frock of blue satin with a hat to match and a heavy fur coat to which was fastened a sprig of lillies of the valley’.  Mrs Chesney wore ‘a beautiful gold tissue brocade coat and acted as bridesmaid’.  As to the bride, ‘she leaned on the arm of her son in law, Mr Ronald Chesney’.

Home Office, 3Oth October, 1930. Notice is hereby given that the name of Thomas Chalmers Menzies, styling himself a Baronet, is not entered on the Official Roll of the Baronetage, and that no claim on his part to the rank, title and dignity of Baronet has been established. A. J. Eagles ton, Registrar of the Baronetage.

Mary Menzies (now a widow) and her daughter (having separated from Chesney) opened a house in Ealing as a nursing home.  In 1949 Mary Menzies said, ‘Myself and my daughter paid money out of our own private incomes to assist those people.  It was regarded by me as something done in the war effort’.

Chesney Had Many Links With Hastings -
Hastings and St Leonards Observer - Saturday 20 February 1954
BOROUGH POLICE AIDED YARD IN MURDER INQUIRY Hastings was closely linked with the amazing career of 46-year-old Ronald John Chesney, whose suicide in Germany on Tuesday led to the disclosure that he was the man whom Scotland Yard officers wished to interview in connection with the murder at Ealing of his wife and her mother, the self-styled Lady Menzies.

It has been recalled this week that before the war Chesney lived in the borough for some years, and  was well-known to many local people.  They were hectic days, with the hard-drinking Chesney and his wife living extravagant lives, sometimes flush with money and at others being dunned by creditors.

Inquiries by Observer reporters have lifted the veil on Chesney’s turbulent life.

Former public schools boxing champion, he was an almost fantastic figure, Rugby football player, and yachtsman, he easily attracted friends, and deceived many people who would have had nothing to do with him had they known his true character.

Chesney lived in the town for some years, from 1929 onwards, first in a flat at White Rock and later St. Leonards. He was a frequent visitor to local hotel bars and public houses, always ready to join in all the fun that was going.

‘Ladv’ Menzies' sister, Mrs. Bonar, kept a nursing home for old people in large house in Branksome - road, off Filsham road, St. Leonards, and Chesney was known there, too.  Mrs. Bonar died recently and was buried in the Borough Cemetery. It is understood that plans have been made to bury ‘Lady’ Menzies there as well.

Mr. S L Clarke, partner in the firm of Menneer, Idle and Brackett, solicitor of St Leonards...[instructions received from a client Mr. J. D. Milner.... ] acting for Chesney “matter of privilege and duty, and he could say nothing further.

It is understood however that Chesney said he was “completely innocent”.…

An 'Observer reporter learned that Chesney renewed his connection with the town as late as August last, when he opened negotiations through a local estate agent to rent the house in St Leonards previously occupied by Mrs. Bonar with a view to its use as an old people's home.  Chesney was then using the name of Milner, under which he had also sometimes passed in pre-war times.

The negotiations fell through, it is understood, because the three references which Chesney had given did not prove satisfactory.

It has now been revealed that Hastings Borough Police played a leading part in the investigations and that it was their knowledge of Chesney which led Scotland Yard to decide that they wished to interview him in connection with the Ealing double murder. 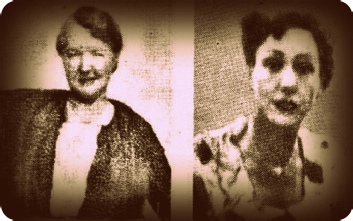