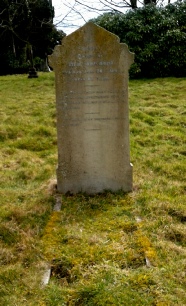 In
loving
Memory of

She was for very many years the
faithful and affectionate servant and friend, in the family of Mr. J. L Evans of Hastings.

Hastings and St Leonards Observer - Saturday 02 February 1907
DEATH MR. J. L. EVANS.—We regret to record the death of Mr. John Lane Evans, The Cottage, Quarry-road. Hastings, which took place a few days ago, from influenza, after only a week's illness.  Mr. Evens had been in failing health since May last.  He was  a B.A. of the University of London, and was formerly in the Paymaster's Office in the Supreme Court.  Mr. Evans retired about 24 years ago and for the past 19 years had resided at The Cottage, but his health had been very delicate, and he took no part in public affairs.  He was nearly 79 years of age.  The deceased gentleman leaves two sisters with whom sympathy will be felt.

In recent years  Mr. Evans and his sisters have taken great interest in the welfare of omnibus employees in Hastings and in other philanthropic work.  Mr. Evans attended the Free Christian Church.  The funeral took place on Thursday.  A service was held at the house and the interment took place at the Borough Cemetery. The Rev. Gardner officiated.

Hastings and St Leonards Observer - Saturday 02 March 1907
LOCAL WILLS.—The estate of the late Mr. John Lane Evans, of The Cottage. Quarry road, Hastings, has been proved at over £20,000.  Mr. Evans was the late principal clerk of the pay office of the Supreme Court.