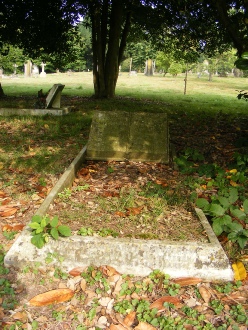 Harry was the only son of Harry White Boreham and Emma Boreham of ‘Coverdale’ Lower Park Rd Hastings,  He was born in 1890 and was baptised in West Drayton on 26th January 1890.  His father was a railway accounts clerk.  In 1911 the family was living at Balvaig, 102 Green Lane Northwood Middlesex.  Harry was a railway clerk like his father and his sister was a daily governess.   At the time of his death this was still his address although his parents were living in Hastings.  Probate was granted to his father and his estate was valued at £575.1s. 2d.  He is commemorated on his parents’ grave.

Harry Pendry Boreham fell at Meteren 16th April 1918 aged 28.  He was an acting second lieutenant serving with the Middlesex Regiment 18th Bn.   He was a corporal in the 9th London Rifles before being

promoted to second Lieutenant on 26th March 1918.  (having served in a temporary position since 1916.

He is remembered on the Ploegsteert Memorial.

Meteren is a village about 18k SW of Ypres on the route to Cassel. Held by the Germans until October 1914, it remained in Allied hands until April 1918 when the Germans attacked it as part of their Spring offensive.  The Germans began a heavy bombardment on the 13th April and recaptured  the village on 16th April.