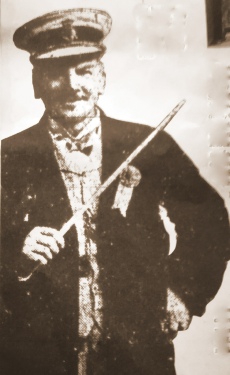 (Unfortunately few graves remain from this area.  Under the Local Authorities Cemeteries Order 1977

Notice is hereby given that the Hastings Borough Council intend to...... remove and destroy any tombstones or other memorials on the graves, together with any railings..... in: amongst others,

In the burial records it shows Thomas Boucher died January 1915, aged 65, and Eliza Boucher (his sister? Two sisters are recorded as looking after him in his long illness, but only one sister is mentioned in his will. ) died in March 1915, aged 62

Thomas was born in Leamington in 1849 and (according to his obituary in the Observer in 1915) came to Hastings as a lad from Warwickshire, nearly half a century ago, presumably with his parents and sisters.

Sarah Anne is buried in AL C23, she died on 24th October 187, aged 38 and on the tombstone it says "Widow of William Wood and wife of Thomas Boucher"

Marriage of Mr. T. Boucher.—An interesting ceremony took place at St. Andrew's Parish Church on Tuesday, when Mr. Thomas Boucher, the well-known local comedian, was joined in the bonds of holy matrimony to Miss Priscilla Mary Morton, of Devonshire-road, Hastings.  The Revs. E. Venables and S. Allen were the officiating clergymen, and they performed the ceremony in the presence of a large congregation. ... The wedding breakfast was served at the residence the bride, where a happy company assembled to wish Mr. and Mrs. Boucher prosperity.  The newly-wedded couple departed, amidst congratulations, by tho 4.10 train for London en route for Warwickshire, where they will spend the honeymoon.

The marriage was not a happy one. Thomas apparently accused Priscilla of neglecting her household duties (to go on the Pier, where, incidentally, he himself often performed) which led to him being summonsed for assault against her in July 1880.   They were still together at the time of the 1881 census.

Thomas's property dealings over the years indicate other interests than those recorded in the obituary (adapted from HSLO).

1880 -  Lot 3 Clive Vale House was a piece of freehold garden ground, planted with fruit trees and general produce, but eligible for building purposes, at the rear of Lot 1, ..... and was bought by Mr. T. Boucher for the sum £475.

December 1880 - PROPOSED NEW ROADS. This report was adopted: The Committee had received and examined the plan of a road proposed to be made on the Clive Vale Estate, to be called Edith-road, near the old farm house, leading northward from Saxon-road, for Mr. Boucher.