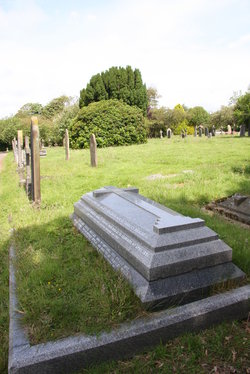 The Times obituary and other sources record only two daughters, but research made it seem likely there was at least one son, possibly two.  The last clue fell into place:

The Times - A correspondent writes to point out that the family of the late Mr Charles Boulnois included, in addition to the two daughters who survived him, two sons, the younger of whom, a naval officer of great promise, died at the age of 24 at Bombay.  The elder was the late Major Boulnois, R.A., Governor of the Babr-el-Gazal, who succumbed to the deadly climactic effects of a successful punitive expedition he commanded in the Sudan in 1905. - Obituary." Times [London, England] 17 Apr. 1912: 11. The Times Digital Archive. Web. 15 May 2013.

Was the space in the double plot as seen above waiting for the second daughter?
NEXT