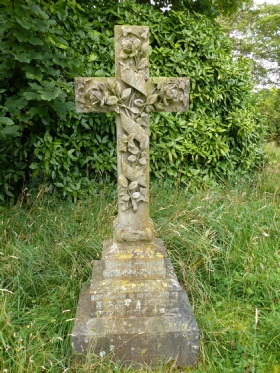 Erected by his sorrowing wife and children

"My Dear.  Bessoms from Harry Australia."

George Charles Bovis was born in 1843 in Hastings, one of 11 children.

Hastings and St Leonards Observer - Saturday 22 June 1895
Baptist Church.- Ihis edifice, after being closed for six Sundays, will be re-opened to-morrow (Sunday), … The building has undergone a thorough renovation, both outside and inside, and exterior and interior now present a very improved and attractive appearance. …… The work has been carried out in most efficient manner by the contractors, Messrs. J. and C. Bovis, Prospect-place, Hastings

In 1901 Elizabeth is a widow aged 54, living at 17 Penrhyn Terrace, with her daughter Elizabeth L  then aged 21, working as a commercial clerk, her son William aged 16, her widowed mother Elizabeth Giles 80, (who was born in The Netherlands) and two other widows.

Elizabeth Lucy Bovis by 1911 was working as a Dress Maker at 13 Salisbury Road, St Leonards On Sea which was the home of the home of her widowed sister, Edith Jennette Cross, widowed grandmother, Elizabeth Phillips Giles and niece Gladys Edith Cross. Elizabeth was apparently a successful seamstress, advertising for apprentices.

Hastings and St Leonards Observer - Saturday 24 November 1945
Miss Elizabeth Bovis, who died at her home, 6a, Cornwallis-gardens, Hastings, on Tuesday last week, was a member an old Hastings family. She was the younger daughter the late Mr. G. C. Bovis and granddaughter of Mr. William Giles, organist of All Saints’ Church for 25 years. The funeral was at the Borough Cemetery on Saturday, the Rev. J. C. Poole (vicar of Holy Trinity) officiating.  Mrs. Cross (sister) and family desire to express their sincere thanks for the kind messages of sympathy and many floral tributes received.