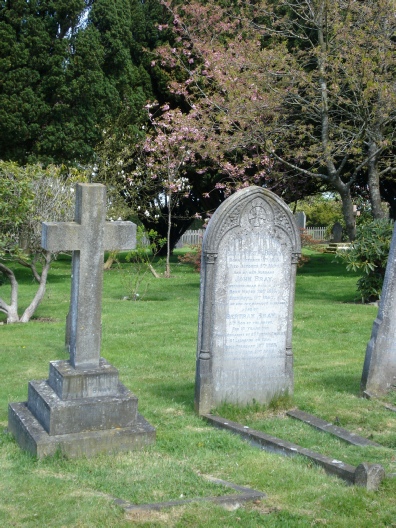 "Leave we now Thy servant sleeping"

"Lord I have loved the habitation of Thy house”

Also of
Harold Lanfranc Bray
Youngest son of John and Agnes Bray
Born April 30th 1891: Died January 12th 1892
"For of such is the Kingdom of Heaven"

Also of Agnes Janet, His wife
Entered into rest May 1916 aged 62 years

Hastings and St Leonards Observer - Saturday 06 October 1894
DEATH OF MRS. JOHN BRAY, SEN. We deeply regret to have record the death which occurred yesterday morning, of Mrs. Elizabeth Bray, widow of the late Mr. John Bray, of St Leonards. The sad event was rather unexpected, as although the deceased lady had been seriously ill for some weeks with pleurisy and pneumonia, she appeared to be much better Thursday evening, and hopes were entertained of her recovery.  She was taken ill while in St Peter's Church three weeks ago last Sunday, and was obliged to go home to the residence of Mr. Bertram Bray, 7, St. Peters-road, where she had lived for many years, before the service was concluded.  Mrs. Bray had been attended by Dr. Ballingall and Dr. Hewland, and Dr. Trollope was also consulted.  Had she lived till next Thursday she would have been 76 years of age.

She had been a widow many years.  Her husband was a well known man of his time, a staunch Conservative, who took a considerable part in electioneering work.  Mrs. Bray, who came of an old and well known Hastings family, was born at Bunger Farm, near where Ore Station now stands.  Both her father and her husband's father were prominent farmers in the surrounding district.  She was a regular attendant at St Peter's Church and was well known at St Leonards, and highly esteemed by all who knew her.

On the death of John’s wife it is recorded
“The deceased leaves five sons, Alderman Bray, and Messrs. Arthur, Albert, Bertram, and Walter Bray, ……These five are the survivors of a family of twelve, there having been three other sons and four daughters.