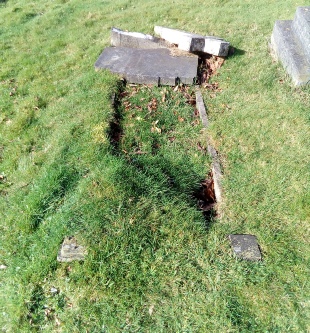 This is the grave of Cicely Evelyn Garrod.  She was the 6th daughter of John and Agnes Bray, known as Evelyn.

[While in Rouen, Evelyn  met an officer in the Royal Flying Corps called Alfred Guy Garrod, known as Guy, who became her future husband.]

The bride, who is a daughter Mr. John Bray and the

late Mrs. Bray, has had quite career in the nursing service. She received some years’ high training at a popular London hospital, which she left very early in 1914, when she was appointed a nurse in Queen Alexandra’s I.M.N.S. and at the Royal Herbert Hospital. Woolwich.  She was before very long put in charge of the operating theatre there.  In October. she was as sent assistant matron to an important hospital in France.  Before proceeding thither His Majesty the King presented her with one of his Birthday Honours, the Royal Red Cross.  About a year ag0o she was placed in charge of a casualty clearing station immediately at the rear of one of our fighting lines in France.  Sir Douglas Haig recently recommended her for “special mention.”

The honeymoon is being spent at Dunville, and Major Garrod will shortly have to resume his duties in France. 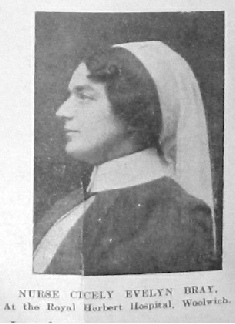