Also of Edgar, son of the above

Wife and Mother of the above

Eldest son of the above

In the 1901 Census Edward James Breed  is shown as a brewery labourer, probably at the Breeds & Co Brewery in the Old Town of Hastings.  At that time the brewery was being run by Thomas Breeds.  (for more census information see http://www.wikitree.com/wiki/Breeds-1 )

He was known as ‘Tiny’ Breeds and was Landlord of The London Trader, (owned by Breeds & Co.) No. 7 East Beach Street, from 1908 until his death in 1945. He was succeeded in this role by his widow, Sarah.  He was also a part-time fisherman.

He married Sarah Elizabeth Lepper in 1894, at which stage there was one child, Harriet Elizabeth Breeds who was born in 1891 (father unknown, another family member?)

By 1901 they were living in in three rooms at Nelsons Cottages (no 2), Nelsons Passage,

He was councillor for St Clements ward for about 20 years 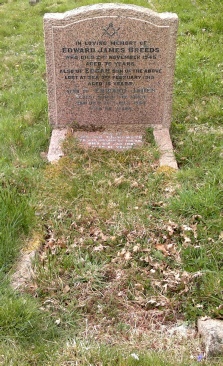