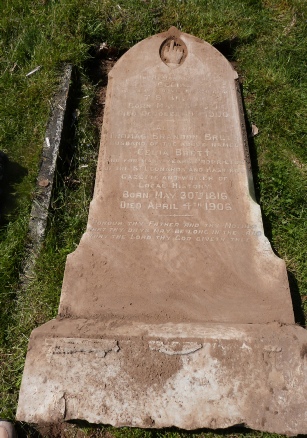 Husband of the above named Celia Brett

For many years proprietor

Of the St Leonards and Hastings

Gazette and writer of

"Honour thy Father and thy Mother

That thy days may be long in the land

that the Lord, thy God giveth thee"

In 1868 he signed a deed in the Bankruptcy Court, to repay his creditors

From a New Zealand Newspaper

Mr Thomas Brandon Brett, a veteran Sussex journalist, died at St. Leonards early in April last, within a few weeks of his ninetieth year. He was the father of Mr R. B. Brett, London manager of the New Zealand Press Agency, and the uncle of Mr. Henry Brett, of the Auckland Star. [Later knighted for his services to New Zealand journalism; he had married a childhood friend from Westfield.]   The deceased journalist was at one time a schoolmaster.  Sixty years ago he started a newspaper of his own in St. Leonards, and was closely connected with Sussex journalism till his death. It was his boast that since he was ten years old he worked eighteen hours a day.