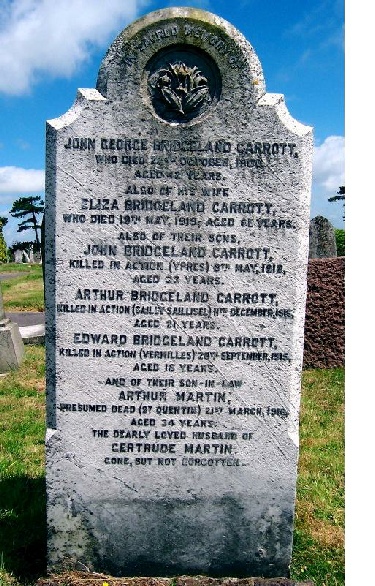 This gravestone shows the terrible price paid by some families during the First World War - three sons and a son-in-law killed in action. The family seems to have had military connections as John was a regular soldier, two other brothers were in the army, at least one before war broke out, and a sister married a naval rating.

John George Bridgeland Carrott was born in Hastings in 1859 and his wife Eliza (born 1858) came from London.  They had eleven children, eight of whom survived to become adults. John was a carpenter. The family lived in Silverhill – in 1891 they were living at 28 Paynton Rd, and in 1901 the now widowed Eliza was living at 49 Silverlands Rd with her widowed sister Sarah and five sons.  John was a carpenter like his father, and Percy (born 1888), Herbert (1889), Arthur (1895) and Edward (1897) were at school.

Next door (no. 47) was occupied by Nellie and Frederick Willard (a carman) and their baby daughter Emmie.  Nellie’s maiden name was Bridgeland Carrott so presumably she was a daughter.

Another daughter Gertrude was a domestic servant at Cromer, North Rd, Hornsey for a Mr and Mrs Montgomery. It was she who married Arthur Martin in Hastings in 1906.  He was born in 1883 in St Pancras, but it would appear they continued to live in London as he enlisted in Holloway and his address at the time of his death was Hornsey Rise, Middlesex.