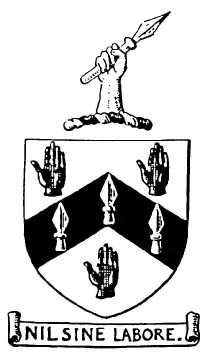 THE LONDON GAZETTE, MARCH 1, 1898.
NOTICE is hereby given that the Partnership heretofore subsisting between us the undersigned Frederick William Brind, Charles Brind and William Charles Nosworthy carrying on business as Wine and Spirit Merchants at No. 6 Gresham House Old Broadstreet in the city of London under the style or firm of F. W. Brind and Company has been dissolved by mutual consent as from the 31st day of December 1897. Business will be continued' at the same place and under the same style or firm by the undersigned Frederick William Brind and other incoming .partners by whom all debts due and owing to or by the late firm will be received and paid.
-Dated this 24th day of February 1898.
FK. WM. BRIND. / CH AS. BRIND. / WM. C. NOSWORTHY.

“PATENT WOOLLEN CLOTH COMPANY, 8 Love-lane, Aldermanbury, London. Resolutions passed June 14, confirmed June 29:  That it is desirable to reconstruct the company, and accordingly that the company be wound up; that H. P. Whisson, 8 Conduit-st, gentleman, F. W. Brind, 1 The Lawn, St. Leonard's-on-Sea, gentleman, and G. W. Knox, 16 Finsbury-cirous, OA, be liquidators; and that the liquidators consent to the registration of a new company, to b& named the Patent Woollen Cloth Company Limited,” [1893]

The company survived this second bankruptcy, moving into new areas of production by starting to made making heavy-duty felt for use in the construction industry.

In 1869 Frederick William Brind was approached by the British Imperial Insurance Corporation of Manchester which was about to open a London office in Old Broad Street, very near premises of Brind’s, the wine merchants; he agreed to join a group of men who would oversee the workings of the new branch

Frank Brind in 1891  was learning his trade in London, working for the architects William West Neve and Ernest Newton, who had both been pupils of Richard Norman Shaw.  Frank’s career in architecture never had time to develop, his health was poor, and he died in 1898 aged 32.

For many years the Brinds featured in the Social Pages of of the Hastings Observer and donated to many causes.  Julia Margaret was an accomplished pianist and did St. John’s Ambulance training:

The St. John Ambulance Examination Results.—The lists of those successful the examination held at the Brassey Institute, on April 4th, by Mr. J. B. Footner, F.R.C.S.E.. are as follows :—Nursing class, No. 1, Mr. J. J. de Z. Marshall. L.R.C.5.1., lecturer (not in order of merit)— Miss Julia Margaret Brind, …..

She remained unmarried and was living at 13 Maze Hill when she died.