& one of the Heroes of

Brind was five times married: first, on 20 April 1833, to Joanna (died 29 Dec 1849), daughter of Captain Joseph Conway Waller, of the Country Sea Service; second, on 11 September 1852, to Mary Georgiana (died 2 March 1854), daughter of Captain Benjamin Carter RN and niece of Admiral Carter; third, on 24 October 1861, to Georgina (died 1862), daughter of Henry George Philips, vicar of Mildenhall; fourth, in 1864, to Jane (died 6 Nov 1868), daughter of the Revd Daniel Henry Maunsell of Balbriggan, co. Dublin; and last, in 1873, to Eleanor Elizabeth Lumley, daughter of the Revd Henry Thomas Burne of Grittleton, Wiltshire, who survived him and died in March 1924.  He had seventeen children.

We regret to announce the death of Gen. Sir James. Brind, R.A., G.C.B., of Highfield. 13. Upper Maze-hill, St. Leonards, which took place on Friday oflast week. at his residence.  The deceased gentleman was born in 1808 and entered the Bengal Artillery in 1827.  In time he became a Major. being promoted to the rank Lieut.-Col. in 1858, and Colonel next year. Further promotion followed in 1867, when he was made Major-General, receiving a commission to Lieut-General, General and Col.-Commandant R.A. in 1877.

He commanded the artillery with reserve force to the Army of the Punjab, in 1849 ; and also acted in the force against the Momands, in 1854.  He served with great credit to his Queen and country, and to himself, and in acknowledgment of the same, received the medal with clasp.  In the Indian Mutiny Campaign he again served with great distinction, and added fresh laurels to his reputation. being in fact repeatedly favourably mentioned in dispatches.  He, in fact, received the high distinction of being thanked by the Governor-General in Council, and also received the medal with clasp.  Such is a brief summary of the deceased gentleman's military career.  General Brind was created a C.B. in 1858, a K.C.B. in 1869, and a G.C.B in 1884.  He was a member the United Service Club.

Sir James has resided in these towns for several years, but has not been a prominent townsman, though he was well-known at St. Leonards. was a sidesman at St. John's Church, in the welfare of which sacred edifice he took deep interest.  He was, too, a staunch Conservative, being vice - president of United Association

The funeral took place on Wednesday, at the Borough Cemetery. The first part of the service was performed at St. John's Church ....... The inner coffin was lined with satin, and the outer one was polished oak with massive brass furniture. The car, an open one, was drawn by four horses.  The coffin was covered with magnificent wreaths.

General Sir James Brind, R.A., G.C.8., on Aug. iii, after a short illness, at the age of eighty years.  He obtained his first commission in 1827, and became Captain in 1842.  His name was repeatedly favourably mentioned in despatches, and he received the thanks of the Government of India, was made C. B., and received the brevet of Colonel for his distinguished services.  He was promoted to the rank of Major-General in 1867, and General in 1877, and Colonel-Commandant in November following, and was placed on the retired list 1878). In further recognition of his military services he was promoted to be a Knight Commander of the Order of the Bath in 1869, and was made Grand Cross of the Order 1884.

“Throughout this long period he evinced an earnestness of purpose, a devotion to duty, with a regard for the interest of all who served under him that gained for him the warm and undeviating respect of the Army. Conspicuously at the memorable siege of Delhi in 1857, where he commanded for a great part of the time the besieging batteries, he animated all under him by a noble example and an almost reckless exposure of himself to danger. It was indeed said of 'Brind of the Batteries' that he never slept. 'We talk of Victoria crosses,' wrote a distinguished officer to one of the historians of the Indian Mutiny, 'but Brind is a man who should be covered with them from head to foot.' 'On all occasions,' wrote another of the foremost of our Delhi heroes, 'the exertions of this noble officer was indefatigable. He was always to be found where his presence was most required; and the example he set to his officers and men was beyond praise. A finer soldier I never met'”
http://www.leamarsh.com/sites/starter/Brind/Brinddoc/sirjohn07.html

Sir James features in many books and other material, see the Internet. 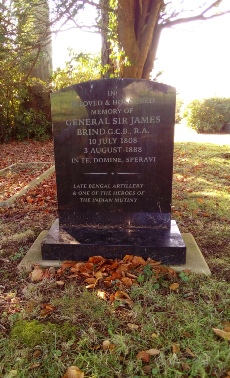