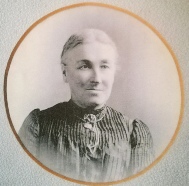 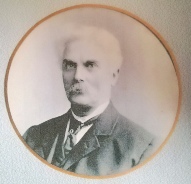 Joshua Broughton was born in Gilmorton, Leicestershire in 1843, the youngest of seven children.  The 1851 census shows the whole family worked from home as framework knitters, including eight year old Joseph.

[Life as a framework knitter was tough. The hours were long and working conditions cramped, uncomfortable and dangerous.  The framework knitters had to pay to use their knitting frames, even if no work was available, and buy all their own materials. The industry was controlled by Master Hosiers, who also owned the knitters’ houses.  Low wages and high overheads meant the whole family would have to work, with children taking on tasks such as wool-winding, just to make ends meets. Poor health and malnutrition were rife.]

By the 1861 census Joshua had left home, following his brother south to find work as a painter-decorator.  When he was 24 he married Emma Ann Short from Southwater, near Horsham.  They moved to Croydon where Joshua built up a good business as a painter-decorator and had three children, all boys.  When she was thirty, she died of peritonitis.

Joshua married Harriet Mary Ann Norton, who was born in Bombay (now Mumbai) in 1845. Her grandfather, Thomas Norton, was rhe first C.M.S. missionary in South India, her mother went to India as a governess to another missionary family and met and married Thomas’ son Benjamin.  When Harriet was three, Benjamin died and she and her mother returned to England.

By 1871 Harriet, now aged 26, and her mother were running a ‘School for Young Ladies’ in West Croydon.  Harriet met Joshua, and they were married at the Baptist Tabernacle in West Croydon.

Joshua retired in 1900 and in 1908 Joshua, Harriet and two of their daughters, Alice and Miriam, moved to Hastings.  Joshua died in 1909 but not before making a good local reputation for himself.

Alice married Henry Blackman 1915 and Harriet died a year later.  She and her two daughters were often mention in the Observer over the years after the death of Joshua, attending functions and giving donations.

MR. JOSHUA BROUGHTON. The Blacklands district has lost an esteemed resident by the death of Mr. Joshua Broughton, of Sandhurst Elphinstone-road.  Mr. Broughton. who was 65 years age. had resided at Sandhurst Lodge for about two years, and had previously been a visitor to Hastings.  He formerly lived at Croydon, where he was also much respected.  He leaves a widow and family.  Mr. Broughton was a worshipper at St. Mary-in-the-Castle Church, where the first part of the service will take place to-day (Saturday), at two o'clock.  The interment will be at the Borough Cemetery.