And in Memory of their son

He will dwell with them, and they shall be his people. Behold, I make all things new. 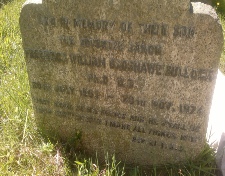 A churchman and scholar whose family had long links with the borough, Canon F W Bullock, of 6 The Uplands, St Leonards, died in St Helen's Hospital on Thursday last week. The funeral was on Thursday at St Helen's Church, Ore, where his father had once been rector.

Frederick William Bagshawe was born on July 20 1903, at Ore Rectory, Hastings, being the son of the rector, the Revd William Charleston Bullock, and of Mrs Helen Janneta Bullock, and the grandson of the Revd Charles Bullock, founder of 'Home Words' and of Dr Frederic Bagshawe, who was Mayor of Hastings in 1897-8.

Canon Bullock was educated at Rugby School and at Cambridge and Manchester universities, obtaining doctors' degrees in philosophy and divinity. While at university he reached the semi-final of the Cambridge squash rackets competition, and played rugby fives for Emmanuel College and lawn tennis for Manchester University.

He was ordained deacon in 1927 and priest in 1928, and three years later became vice-principal of Ridley Hall, Cambridge, where he remained until 1936. He was an Examining Chaplain to the Bishop of Worcester from 1935 to 1941, select preacher, Cambridge University, in 1937, and for many years an inspector of theological colleges and a director of 'Home Words' printing and publishing company. He was a canon residentiary and treasurer of Truro Cathedral and a governor of Truro Cathedral School and served on Truro diocesan committees 1946-48 and was then appointed canon emeritus.

After serving as a chaplain to the Forces in the second world war, Canon Bullock became rector of Hollington Church-in-the-Wood from 1943 to 1946 and returned to St Leonards in 1948. He served as a governor of Hastings Grammar School 1944-46 and 1948-52, and as a member of various Chichester diocesan committees.

For 20 years he was the warden of lay readers for the Archdeaconry of Hastings and for eight years a member of the Church of England advisory committee of the South-East Metropolitan Hospital Board. He wrote histories of St Helen's Church, Ore; Hollington Church-in-the-Wood; St Mary's Church, Truro; Ridley Hall, Cambridge (two volumes); and 'Training for the Ministry of the Church of England' (two volumes); and 'Evangelical Conversion in Great Britain' (two volumes) and 'Voluntary Religious Societies'.

His other interests included listening to classical music, visiting ancient sites and historic buildings at home and abroad, hill walking and mountain climbing.

"Canon Frederick William Bagshawe Bullock, of The Uplands, Maze Hill, St Leonards, Canon Emeritus of Truro Cathedral, left £2,000 to his housekeeper, Minnie Osborne, £1,000 each to augment the endowment of the benefice of St Mary Magdalene, St Leonards, St Helens, Ore, St Leonards Parish Church, and St Leonard's, Hollington, and £1,000 to the Historic Churches Preservation Trust.  The canon, who was 71 when he died in November, left £125,533 net (duty £38,454)."