A Boy Killed at Sedlescomb.
An inquest was held on Thursday last on the body of John Bumstead, of Hastings, who was killed by a waggon wheel passing over his chest, causing instantaneous death.  The boy, it appears, tried to get onto the waggon by the wheel while it was in motion, and slipped down in the attempt.  A verdict of " Accidental death " was returned.  We understand that the lad the son of Mr. Bumstead of Clive Vale.[Sic]

The funeral wa reported om 17th October 1891.  John Henry Bumstead, who was killed at Sedlescomb last week was attended by the members of the Staunch and True Lodge of  Juvenile Sons of PHOENIX and also representatives of the Safeguard, Pride OF Hastings, and Sunbeam Lodges.

The Rev. H. U. Whelpton (vicar of All Souls) officiated both at All Souls' Church and at the Borough Cemetery.  The church choir, of which John was a member, also attended.  Several beautiful wreaths were sent, one being from the deceased's schoolmaster and schoolfellows. 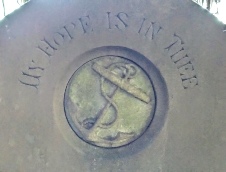