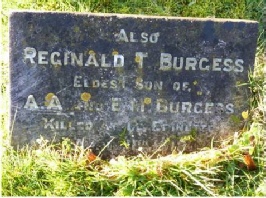 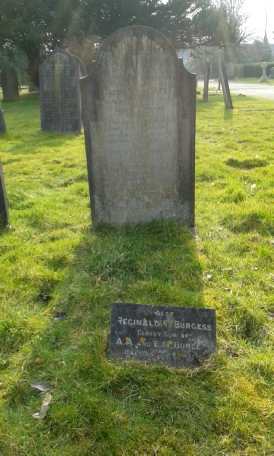 in loving memory of

the beloved wife of Thomas More

Behold the sun was bright and gay

As it shone across our path.

When lo! A cloud appeared I sight

And took our joys away.

Gone but not forgotten

Reginald Thomas Burgess was the eldest son of Albert and Ellen Burgess of 24 Shepherd Street, St Leonards, on whose grave it is recorded that he was killed at Le Epinette on 11th April 1918 at the age of 24.

He was a private attached to the Machine Gun Corps (Infantry) 51st Battalion, although he had originally been in the Royal Sussex Regiment.

He is remembered on the Loos Memorial. In the obituary notice in the Hastings Observer of 4th May 1918 his rank is given as Lance Corporal.

The Burgesses are recorded as living at 24 Shepherd Street, St Leonards in both the 1901 and the 1911 censuses. Albert Burgess was a baker in 1901 but had become a gardener by 1911.

Reginald had two brothers, Ernest (born 1896) and Harold (born 1905). Both Reginald and Ernest were butcher’s assistants.