As recorded in the Hastings and St Leonards Observer

Hastings and St Leonards Observer - Saturday 19 August 1916
MILITARY FUNERAL FOR AN AUSTRALIAN SOLDIER.
Some very pathetic incidents were witnessed, and at the same time a spontaneous outburst of kindly feeling towards the Buchanan Hospital, on the occasion of the funeral of an Australian soldier, on Wednesday, he having died in that institution last Saturday. He was Private James Walter Christensen, 31st Australian Battalion, of Melton-street, Mackay, Queensland, Australia aged 39 . He was wounded in Flanders early in July.

By the kindness of the Colonel Commanding the 6th Royal Sussex Regiment military bearers and a firing party were provided at the Borough Cemetery. A service, conducted by the Rev. C. A. Weeks, was held in St. Peter's Church.  About twenty-five wounded, mainly Australians, and a few Canadians, were subsequently conveyed to the Cemetery in carriages.  Mr. H. Gilbert Henderson represented the Hospital, and Sister Florence and two nurses who had nursed the deceased were present.

The service was solemn and impressive, the soldiers joining heartily in the singing.  Several of the Australians expressed their sincere thanks to Mr. Henderson for the treatment accorded their fallen comrade.  Very beautiful wreaths were received from the Board of Management of the Buchanan Hospital, the nursing staff, his fellow wounded in the Buchanan Hospital, the Countess of Lauderdale, Mr. P. W. Jepson. Mrs. Morris, Mrs. Rogers, Mrs. Morgan and Eileen, Mrs. Hoar, Mrs. Gibbs, Mrs. Fielding, Mr. Packwood, Miss Laurence, Miss Crook, and many others.

Hastings and St Leonards Observer - Saturday 07th October 1916
SPECIAL PROVISION AT THE CEMETERY. The Town Council in Committee yesterday at the instance of Councillor Perring (the Deputy-Major), who is Chairman of the Cemetery Committee, discussed the desirability of setting apart spaces at the Borough Cemetery for the burial of soldiers and sailors.

The proposal was formally received, and the general opinion was that there should a simple record on each grave, and ultimately a memorial the centre of the graves.

The Council approved of the proposal, and details were referred to the Cemetery Committee for consideration and report.

Hastings and St Leonards Observer - Saturday 07 October 1916
HOW WE BURY OUR HEROES. - HASTINGS CORPORATION METHODS CONDEMNED.
We received the following letter on Tuesday:-
Some few weeks ago a young Australian hero died at the Buchanan Hospital from wounds received while fighting at the front.  Several ladies interested in this young soldier promised his friends at the Hospital that they would look after his grave.  To show the kindly interest taken in this young fellow, some of the flowers were cut from the wreaths, and sent to his parents in Australia with a detailed account of his funeral

Upon visiting the cemetery a few days after, these ladies failed to find the grave.  Eventually they found a grave-digger who took them to what is called the 'Common Part', and left them with the remark   "This is how we treat our heroes, one has been buried there now, and two more will go on top."  You can imagine the disgust of these ladies to find that the Town Authorities should allow one of our Over Sea Heroes to be laid to rest in a 'pauper grave'

Upon making enquiries at one of our Town Councillors he informed me that they had no other choice but to bury our Heroes (without friends) in this way.  He said if these ladies objected to this kind of burial why hadn't they thought of it before, and bought the ground

Now, Sir, to me it seems disgraceful that no provision has been made by the Town Authorities to grant land at the cemetery, so that lads from over sea can be buried as we would bury our own; and if as years go on their friends from the Colonies wish to see where they are buried they will have no difficulty in finding out. If the Town will grant the ground I know quite well there are plenty of residents here who would only be too glad to bear the expense of Headstones and to see that the graves are kept in order.

Extract from a further letter from T. Povey
….After the esteem and regard shewn this young soldier by the gentry of St. Leonards, who sent many beautiful floral tributes and the trouble taken by the Hospital staffs securing a firing party as a last farewell, it is unbelievable that the Town Authorities would show no better respect but a pauper's grave.  What do the Council propose doing, Sir, when the proposal to allot a piece of ground is an accomplished fact?  There are four (not one) of our soldier lads laid to rest in common graves.  What will our lads say when they return home end find the treatment meted out to their dead comrades?  I can tell them what some of lads the Front think about it  The town can only do one thing, and that to get an order to have all four bodies exhumed and re-buried in a proper respectful manner.  There are many in town like mvself who have their sons fighting at the Front, and we shall never be contented until this great stain of disgrace has entirely been removed, and the sooner the Town Authorities realise this the bietter. T. Povey

WHAT THE CORPORATION HAS DONE IN THE MATTER.

The only reply one can make to the writer of the letter in the preceding Note is to remind him that the Town Council has Instructed the Cemetery Committee to consider and report a proposition to set apart spaces at the Borough Cemetery for the burial of soldiers and sailors, and that the feeling of the Council, when it gave this instruction to the Committee, was in favour of carrying out the proposal and also placing a simple record on each grave, with ultimately a memorial stone in the centre of the graves.  The following letter, which 1 received yesterday (Friday) morning, explains what has already been done by the Corporation Committee and what it intends to do:

As Chairman of the Cemetery Committee, permit me to say a few words re the above subject and the intemperate letters which have lately appeared in the ' Observer.

As soon as it came to our knowledge that an Australian soldier had been buried in one our common graves (I object to the term pauper) I, with the support of the Vice-Chairman. Councillor Matthews, took the matter up with the view of getting a portion of the new part of the Cemetery set apart (free of charge) for the burial of any soldier or sailor who may die in our district during the War and such time after as the Council may decide.  For that purpose we visited the Cemetery, and in consultation with the superintendent selected a portion of a new plot to be used exclusively for the burial of our heroes.  I laid plans before the Council Committee some weeks ago before anything appeared in the press, (so far as I know).  The Council expressed the warmest interest in the scheme and a nearly full Council passed a unanimous vote in support it, referring it to the Cemetery Committee to work out the particulars and report.

I may say that already one of our Canadians was interred in the plot on the very day my motion was before the Council.  It is our desire that anyone on active service or wearing the King's uniform up to the time of his death, is buried with every mark of honour and that the plot will be set apart for ever as an honoured resting place for such heroes as die in or midst.

The spot chosen is on a gentle slope in such a position as may well appeal to colonial sentiment and whatever name the authorities may ultimately give to it 1 suggest that for the moment it be known as the “Heroes Corner”.

A full list of those interred will kept at the Town Hall or other suitable place and it is hoped that ultimately a Monumental Shrine may be erected to their memory, either by public subscription or by public funds.  …..

NEXT - The Mystery of JB I Burials 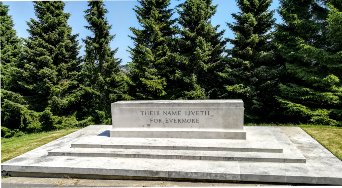 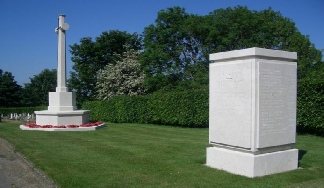