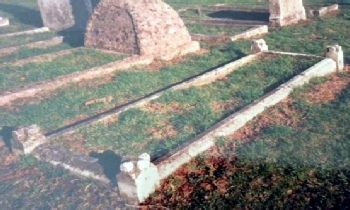 [There are many graves like this where the inscriptions are along the sides, and become hidden by a buildup of soil and grass.]

Alfred James Cobb, who was born in Hackney 23rd May 1874, was a draper’s traveller from the East End of London when he moved to Hastings in 1900.  He married, in Hackney in 1889, Florence and they had a daughter a year later, also called Florence.  In 1901 they were living in Bulverhythe Road and he was a Draper’s Manager.

At some point his wife Florence disappeared from view; it is suspected by some that she didn’t come to Hastings with him and the 1901 census record is wrong.  It seems more likely that she left him once he became embroiled in some bizarre happenings. (See below)

Around 1906 he was living with Mary Ann Bassett, who was born on 4th March 1877 at Prospect Cottage Ore.  She was the daughter of hawkers, and by this time was pursuing the trade herself.  She is recorded in the 1911 census, as one of a family of 3, the others being Alf and his daughter Florrie.  He and Mary married in 1915.

Cobb soon became the articulate figurehead of the radical socialist movement in Hastings, as secretary of the local Social Democratic Party.  He was elected to the Town Council on 6th November 1920.

During the war he served had with a Labour Battalion in France.  Following an accident whilst overseas, he became subject to epileptic fits, and his health became generally poor.  After his discharge he had to go into hospital on numerous occasions but his health continued to fail.   He died at his residence, 7 Brook Street on 5th September 1921.

The Observer has many, many incidents recorded involving Alf Cobb, some involving Mary and later Florrie.  For more details see Smith, Mike: Alf Cobb : Mugsborough Rebel The Struggle For Justice In Edwardian Hastings

At the Revision Court hearing on 11th September, 1909 Alfred James Cobb, of 52 Middle Street, applied for an occupier’s vote.  This revealed that some confusion existed about the name of the tenancy at Middle Street, listed under Bassett (a Mrs Bassett also lived with Cobb at No 52), although the landlord, Mr Parker, appeared in court and said Cobb was one of his tenants.

He was trading under the name Bassett in 1906, running a fruiterer’s business in Queens Road. [there were bankrupt proceedings against the said Basset]  .

Alfred James Cobb, trading as Paul Bassett at 10 Norman Road as a fruiter and greengrocer appeared at the Bankruptcy Court.  Before Cobb took the business, he was working for a wholesale firm, Messrs Paine Rogers and Co, and previous to that he was a hawker.  He commenced business in September 1904, having no capital.  At the time he was receiving credit from the Southern Produce Co and as they were not then anxious to make a settlement he had hoped to carry on the business. He did so for 12 months and also continued hawking. Liabilities: £118 7s, assets £2 4s 2d

There was further confusion about the name Thompson and whether Cobb had used it, as opposed to his claim that two men who wished to be anonymous traded under this name; he was just the appointed secretary.

1908 13 July - Cobb Leads Hawkers Protest - The Mail reported: There was a meeting on Monday evening, of ‘persecuted’ street hawkers at the corner of South Terrace to protest about the 20 prosecutions on 9 July.  Mr A Cobb as the hawkers’ leader spoke for an hour, with the police watching the proceedings the whole evening.  Cobb condemned the bye-law as showing the Corporation’s bias against them.  Mr Cobb also cited the bye-law prohibiting ‘touting’ and said it nonetheless occurred daily outside restaurants in Havelock Road and Pelham Street.  Cobb said the ‘eagle-eyed’ policeman on point duty did not apprehend coachmen and footmen waiting with their carriages in Robertson Street outside business establishments. “I am not going to knuckle down to regulations which I think are totally unnecessary and unfair.” (Loudly applauded).