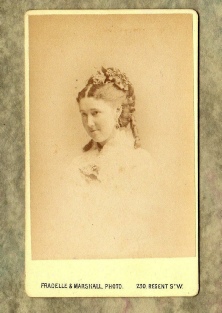 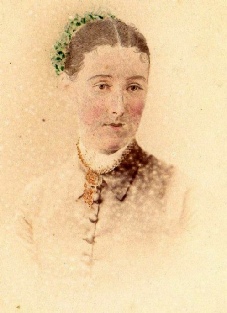 There were two Corbett daughters, but both these appear to be Margaret, the one on the left taken in Melbourne, and the one on the right in London (signed Maggie).

Her death notices are at variance.

Isabella Street, Malvern, is in Melbourne, Katoomba in New South

Edinburgh Evening News - Tuesday 27 April 1897
At Katoontha. Isabella Street, Malvern, Melbourne, on the 12th of March, Margaret Stewart, late 5 Great Stuart Street, elder daughter of the late Andrew Gibson Corbett, of Melbourne and Glasgow.  [Katoontha is the name of a ship sailing between Australian ports, but also quite often a mis-spelling of Katoomba - Great Stuart Street is in Edinburgh and her sister Janet lived there, as did her Mother at some point.)

The following letter would appear to be written by Margaret, but it might have been Janet..

The Argus (Melbourne) Mon 8 Jan 1877
ROMAN CATHOLIC INTOLERANCE
TO THE EDITOR OF THE ARGUS.
Sir, I have just read a letter in your issue of to-day under the above heading. It speaks of a Protestant lady living at Brighton distributing bouquets of flowers to the patients in the Melbourne Hospital, and inserting a proselyting tract in the same.  I have been the habit of distributing bouquets of flowers to the patients, and sometimes have appended to them a text of Scripture, specimens of which I enclose to you, but I have never on any occasion whatever inserted a proselyting tract in any such bouquet, or tract or leaflet of any kind, and have rarely appended the Scripture texts.  I have been in the habit of visiting the Hospital for the ast 20 years,…. I go there to visit Protestants only, and in going through the wards I always pass by the Roman Catholic patients ; and I do earnestly protest against being hindered and prohibited from continuing to distribute Protestant tracts and books among our own people,-I enclose my card, and am -Yours, etc
ONE PROTESTANT LADY RESIDING IN BRIGHTON. Jan 5

The Argus (Melbourne, Vic.)  Sat 11 Jul 1874
TRANSFER of LAND STATUTE.-No. 6920.
MARY ANNE CORBETT, of Brighton, county of Bourke, wife of Andrew Gibson Corbett, of Brighton aforesaid, merchant, has applied to bring the land described at the foot hereof under the above statute

The Argus (Melbourne, Vic.) Thu 26th May 1938
The will, dated April 12, 1936, of Janet Gibson Corbett, formerly of Melbourne, but late of Great Stuart street, Edinburgh, Scotland, spinster, has been lodged in the Victorian Probate Office for sealing.  Testatrix, who was a daughter of the late Andrew Gibson Corbett, of Melbourne, merchant, died on December 22, 1937, leaving estate in Scotland valued at £27,797, and in Victoria real estate valued at £7,000 and personal property valued at £10,159. By her will she bequeathed most of her estate to relatives, with contingent legacies to many charitable Institutions In Scotland and Victoria, with a proviso that the residue, if any, should be divided between the charitable objects named.  Among the specific bequests were £8.000 to Miss Ethel Jane Pearson, together with her house and grounds In Bay street, Brighton; £5.000 to her niece, Mrs. Stewart, wife of Alexander Stewart; £6,000 to Mrs. Lillian Snape, of New street, Brighton; and £2,000 to Mrs. Sarah McFarland.

Lord Rowallan, in his autobuiography, says:

“The great trade roues to the Colonies were opened up, and in this Glasgow and my Corbett ancestors played their part.  Dr. Lorimer’s [Corbett - Rowallan’s great grandfather] second son Andrew followed the Gibson [Dr. Lorimer’s wife was a Gibson] tradition of overseas trading and took his business out to Melbourne.