Emmeline was the daughter of Hannibal Hawkins Macarthur (1788-1861)who was the nephew of John Macarthur of Elizabeth Farm and Camden Park.  Hannibal purchased a property called Vineyard in 1813 and in 1833 commissioned architect John Verge to design a large house to replace the existing Vineyard cottage.  This 'very superior' new house was not long completed when Charles Darwin went to lunch there in January 1836 with a group of naval officers from the Beagle.  From that time until late 1848 when financial disaster forced Macarthur to sell the estate, Vineyard was a centre of social life in the colony.

Her maternal grandfather was Philip Gidley King (1758-1808), first governor of Norfolk Island and Governor of New South Wales,  born 23 April 1758 at Launceston in Cornwall, where his father, Philip King, was a draper; his mother was a daughter of John Gidley, attorney, of Exeter. 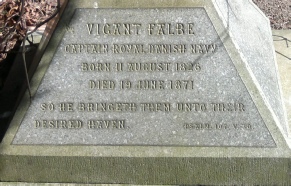