He was a composer of music and his profession in the census is given as Professor of Music.

One of his compositions, Valse de l'hopital, was written to promote fundraising for the Devon and Exeter hospitals.  The sheet music cover paid tribute to the governors, surgical staff and subscribers of the ‘valuable institutions’, one of which features on the front cover.  The dances were played at a special concert.  They were composed when his son Edward’s life was saved by the doctors. 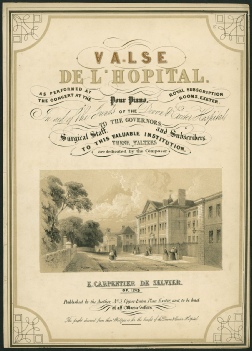 Edward de Selvier-Solis, of Darro, Spain (Census gives his birthplace as France) is found on the 1851 census in Exeter.  He was born c.1795.  On the 1851 census (under Carpentier) he is found at 16 Paris Street, Exeter, with his wife Emma, born 1820 in France, with children.

There is a death record for an Annie Eliza De Selvier in 1886 aged 48.  She died in Ireland, so she may be a sister of Elias.

Her mother, Alice died  at 30 Eversfield Place, St. Leonard's-on-Sea, on 1 December 1891 and is buried in the same grave.