Samuel was born at Portsea, Hants.

1851 Census:  The family were  living at the Royal Naval hospital in Walmer.  James was a year old  and had 2 older sisters and a brother.  His father is listed as a boatman & coastguard.

1871 Census and the family are at  4 Trinity Place Hastings and his father now aged 51 is a superannuated coastguard . James aged 18 is a clerk for the Royal Navy.

1881 Census: James aged 28  and unmarried is in Hampshire on the HMS Hector as Assistant Paymaster.

In 1888 James W Dixon is reported in HSLO as Paymaster in charge of the Naval Depot at Yokohama, it is also mentioned that "he was wounded at New Guinea in 1884 and received a pension for his wounds."  His brothers, Captain John W. Dixon, and Captain George M Dixon are also mentioned.

“The Death of Mrs Dixon of 4 White Rock Road who died on Thursday.   The deceased lady never recovered from the shock she sustained on receiving the news of the drowning of her son Paymaster Dixon in the disaster that befell the Serpent off the coast of Spain.  Since then she had been confined to her room.  Much sympathy is expressed for her husband and daughter”

HMS Serpent  was a torpedo cruiser built in Plymouth and launched in 1887. It was  wrecked in November 1890 during violent storms off the coast of Camarinas Galicia with the loss of 173 of her crew of 176 men.  The cause was an error of judgement on the part of those responsible for the ship’s navigation.  Still her officers and men obeyed orders and maintained good discipline to the end.

The three survivors Edwin Burton, Onesiphorous Luxon and Frederick Gould, were the only ones wearing lifejackets and the loss of the ship led to the compulsory issue of lifejackets to all Royal Navy personnel which remains the same today. -Wikepedia.

ALL creditors and other persons having any claims or demands against the estate of Samuel Elgar Dixon late of No. 4 White Rock-road Hastings Sussex, Gentleman, deceased who died on the 6th day of January 1898 and whose will was proved by John Whitly Dixon the executor therein named on the 26th day of January. 1898 in the District Registry at Lewes ………

‘He giveth his beloved sleep' 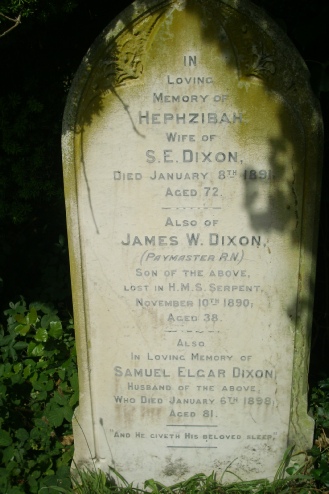