A HASTINGS MAN STABBED IN CHILE

It is our sad duty to record the death of a native of Hastings who was stabbed at Anead, Chile, South America, on the 25th November, last year.  The young man's name was Henry George, the eldest son of Mr James Dunk, of 27 Mount Pleasant road, Hastings, who has been in the employ of the town authorities for 17 years, more particularly connected with the water works, sinking the wells, &c, and who, at the present time, is the superintendent of the breastworks at the Fishmarket.  It appears that the unfortunate young fellow sailed from Liverpool on the 5th June last in the merchant ship "Alpheta", bound for Autofogasta, Chile.  Upon arriving there he left the last-named ship and joined a Chilean barque as general mate.  He was well-known on the coast, and one of his friends at Ancod invited him to a wedding which was taking place.  We should also mention that his friend had a rival for the hand of his betrothed in the person of a Manila man.  This individual, a man of colour, was at the wedding, and picked a quarrel with the husband, and on Henry George Dunk going to try and make peace between them he was stabbed in the stomach.  The only words which he uttered were "I can't speak; All my wind has gone."  The deceased shortly afterwards expired.  The murderer was promptly arrested and condemned to be shot through the heart which sentence he was awaiting in the lock-up when our information was sent off.  The unfortunate mate was in his 23rd year, and was very much respected by his comrades, who held him in high esteem. 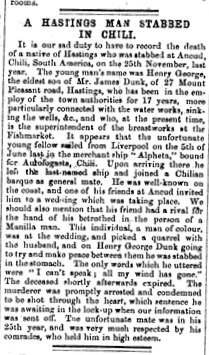 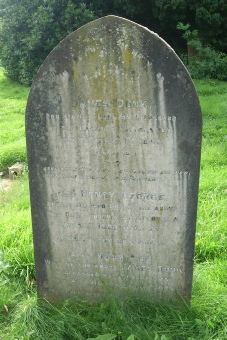