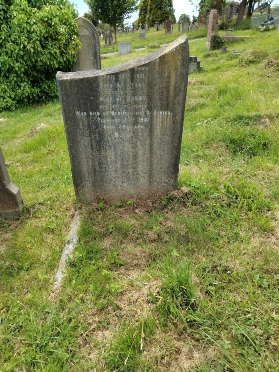 Who died at Bloemfontein, S. Africa

In 1891 the family were living at 22 Bohemia Road: Thomas James was born in Holborn and his wife Harriett in Hooe.  Thomas was a Poulterer and Harriett is an employee, presumably in the poulter's.   The children are Rose Mary, aged 19, a nurse, Thomas James [son] aged 15 and an erran boy, Harry, aged 12, Fanny, 10, Albert Victor, 3, and Frederick Claude, aged 3 months. Somewhat oddly, by the 1911 census, despite the Observer story, Thomas is still listed as a Polterer.  Harriett has only one 't'and is shown as born in Hove.

Hastings and St Leonards Observer - Saturday 09 March 1901
ST LEONARDS VOLUNTEER'S DEATH AT BLOEMFONTEIN.
We regret record the death Private Harry Dunn, of the 38th Company Army Service Corps (No. 15,435), which took place at Bloemfontein, from enteric fever, on February 22nd.  The son of Mr. and Mrs. T. Dunn, of 3, St. Marys-cottages, Gensing-road. he was a native St. Leonards, having been born at Market-passage, Norman-road.  Private Dunn was for five or six years in the employ of Messrs. Hickman Bros., Robertson-street, and was popularly known to his friends in the trade as " Bill." For two or three years previous to going out to South Africa, in March last, he was in the Artillery Volunteers at St. Leonards.  The young man, who was only 22 years of age, took part in the fighting on the Zand River, when the Boers made a night attack.  Sympathy will be felt for his parents and other relatives in his early death.

Hastings and St Leonards Observer - Saturday 28 March 1903
ST. LEONARDS BOY'S DEATH. -  A DOCTOR DESCRIBES AN UNCOMMON CASE.
On Monday afternoon, at the Bopeep Hotel, before Mr. Davenport Jones (Borough Coroner) an inquiry was held into the death of Horace Dunn, aged seven.  Harriiett Dunn, the wife of Thomas Dunn, 3. St Mary's-cottages. Gensing - road. St. Leonards, said deceased was her daughter's son and had lived with witness since he was three months old.  He was in good health until last Friday, when he became ill. though she did not call in a medical man till Saturday morning, when he was much worse. He died on Saturday evening at a quarter to five.

Mr. Robert Johnson, surgeon, practising at St. Leonards stated that he was called to see deceased on Saturday, and he found him unconscious.  Later in the day he found him much worse, and the lad died soon after, never recovering consciousness. The symptoms were very vague. He had made a post-mortem examination, and found the brain was very diseased, and that was the cause of death. The case was a rather uncommon one

The Jury returned a verdict of "Death from natural causes."

Horace is buried at EH D12