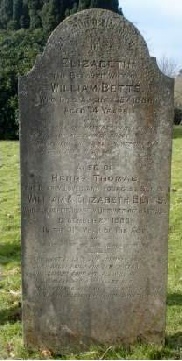 Henry Thomas Betts is commemorated at AS E30 with his parents, Elizabeth and William, but he is not buried there. Possibly his body was never found.

He fell overboard from the RX 232 “ Dove” off Dungeness on the 2nd December 1886.  He had been sitting on the side of the boat picking mackerel out of the net, it was blowing very hard with a good sea on.   His oil frock kept him afloat for half an hour but the crew could not reach him because they were short handed.  Betts was single and had been with Charles Gallop, the owner and master of the “Dove”. for several years.

They lost both their anchors and cables, and set sail for-Bopeep, thinking they might be able to land there.  There they ran upon the groyne, but could get no help.  There were four or five men on the beach, but as neither they in the boat, nor those on the shore, had a line, they could not get ashore.  They laid there close to the beach tossing about for ten minutes, when the boat's side was knocked to pieces. The tonnage of the boat was six-and-a-half.  Her mast fell across the groyne, and she became full of water, and her bottom touched the ground.  Witness and his companions could not get ashore.  He and Brazier then got on the mast. He could not see his brother, but he heard him say “Oh dear."  The side of the vessel was washed away, and they were thrown under the water.  He could nut recollect any more until he found himself on the beach.  It was 11 o'clock at the time.  He did not know who found him.  He was taken to a cottage at Bopeep, where some hot coffee was given him.

Witness believed if those on the beach had thrown them a line, they would all have been saved……… In reply to questions, Mr. Phillips said he understood the management of a boat. He was showing a light. The Coroner remarked that he did not think a light was much good on such a night. ….. In reply to further questions, witness said he had some large sails with him, but could not set them, on account of the wind.  The ropes of the vessel were frozen.

George Sargeant, a fisherman, living at Brewery-cottages, Hastings, said that while he was searching the beach on Tuesday, he found the body of Brazier at the end of the Parade, on the sands at BexhilL  Deceased was only partly dressed.  Coleman, living at 2, Hamilton-road, Bexhill, deposed that he was a fisherman.  He discovered the body of Phillips at six p.m. on Tuesday, off Galley Hill, on the sands, about 200 yards from the beach.  His head was just in the water. Frederic Michael Wallis, a surgeon, of Bexhill, said he examined the bodies on Wednesday morning. There were no marks except those which he thought had been caused by battering on the rocks. Death was due to drowning……… The Jury returned verdict of " Accidental Death," the Foreman adding a rider to the effect that there was a Coastguard Station only a quarter-of-a-mile from the spot where the wreck occurred.  He thought it seemed strange, when four men watched the boat from St. Leonards, that they should not have rendered assistance. The Coroner said he thought was possible that some of the Coastguards on duty were unable to see the vessel owing to the darkness of the night.  A Fisherman explained that there was a Coastguard who saw the boat, who went in search of a life buoy, but before he could get it the disaster had happened. The Jury decided to withdraw the rider.