Temporary Second Lieutenant Foster, who served with 7th Battalion the Royal Sussex Regiment, died of wounds received in action, in London at the age of 23 on 2nd April 1916.  He is buried in Hastings Cemetery in a grave marked with a CWG stone, although not in the war graves section.

He had been in France since 10th July 1915 and appears to have been promoted from the ranks, as he is also listed as being a lance corporal at some point in his army career.

Percy was born in Hastings in 1893 and was the son of Mrs Ada Foster who was living at 1 Alexandra Rd St Leonards at the time of her son’s death.  In 1901 the family of mother and two boys was living at 26 Emmanuel Rd.  Although Ada is listed as married there is no mention of a husband.  Her occupation is given as waitress.

By  1911 Percy  was living at 141 Stonefield Terrace Rd, St Leonards with his mother Ada, (born London 1872) and younger brother Cecil (born Hastings 1896).  Percy was a builder’s clerk, his mother was a letter of apartments and Cecil was an accounts clerk.  Again there is no mention of his father. 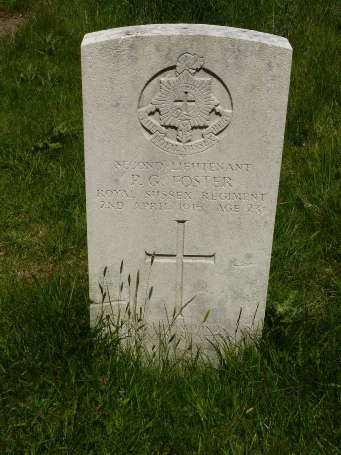 Lieut. Percy G. Foster, 7th Royal Sussex, eldest son of Mrs. A. Foster, 44, Alexandra-road, St. Leonards, well known in business circles in the town, having been with the firm of John Lester and Son, contractors, for some years past, has died.  Upon the outbreak of the War he was called up with the Sussex Yeomany, and was afterwards transferred to the 5th Sussex, and went to the Front with a draft about a year ago.  He received his commission in France for bravery, and was gazetted in November, 1915.  When the Germans exploded five mines the 7th received orders to occupy the craters. "A" and "B" Company occupied one of these craters, but suffered such heavy losses that "C" Company was called upon to reinforce them.  Owing to the severity of the fighting all the senior officers were wounded.  Lieut. Foster assumed command, and held the crater for two days.  On the second day, early in the morning, he was wounded in the leg and face, and later in the day severely wounded in the back with shrapnel, but carried on until the much-needed reinforcements arrived.  He was for some time in hospital abroad, and was later sent to England, and seemed to be progressing favourably. He was operated on at the Darrell Hospital, London, but septic poisoning set in, and he passed away last Sunday.

The funeral took place on Wednesday. The coffin was conveyed with military honours to London Bridge Station, and from thence, accompanied by Mr. C. W. Foster, by train to Hastings.  The train arrived at 1.20 p.m., and a military funeral took place.  A short service was held at the Cemetery before the interment.  As the coffin was lowered, Mr. C. W. Foster placed three red roses on the coffin, which is the emblem of England's last honour to its fallen hero. The firing party was drawn from the Royal Garrison Artillery, and the scene was most impressive.  There was a large number of wreaths from Lieutenant Foster's many relations and friends, amongst them being one from his mother and brother (Mrs. Foster and Mr. C. W. Foster), and a laurel wreath from Miss Taylor.

Lieut. Foster is the first member of the Hastings Y.M.C.A. to fall in the War. Mr. A. Thorpe, chairman of the Association, much regretted that he unavoidably prevented from being present at the funeral to show his respect and sympathy.