This grand polished pink obelisk was presumably meant to be a family plot as William and Caroline had several children and grandchildren but only these two are recorded there.

William was born in Udimore c. 1834 and his wife in Beckley c. 1835 (both in Sussex).  He was the licensee of first, the Warrior Gate (Kellys Directory 1867) in St Leonards, and then the Norman Hotel (now the Norman Arms in Norman Rd). The 1891Census gives his occupation as Licensed Victualler, his address as the Norman Hotel, employing 4 staff, including his son-in-law as a barman.  He has two other children, one 24 and the other 13. After his death in Februay 1892, aged 57, his estate was valued at £6359 8s 2d and his son-in-law (surname Wright) took over the hotel, buying it outright for £3000 in 1909. 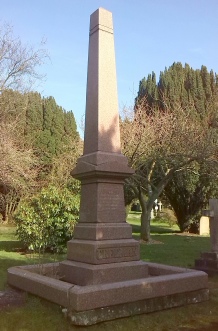