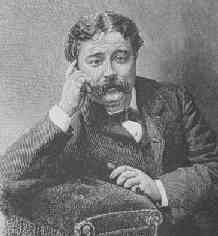 His most famous humorous drawings were published in Punch, for which he started working in 1880, and to which he contributed over 2,600 drawings.  There is what appears to be an apocryphal story about his leaving Punch in 1894.  Some sources say it was when its owners discovered that he had sold one of his 'Punch' drawings to Pears Soap for use in an advertising campaign, other sources say it was when Furniss discovered Punch has sold it to Pears.  Neither story appears in his autobiography, The Confessions of a Caricaturist

In 1890, he illustrated the Badminton Library's volume on Golf.

The well-known personality Harry Furniss gave a talk at the Public Hall in Robertson Street.

1893 - At a packed public meeting held at the Town Hall on Wednesday the 8th March it was agreed that a golf club should be started in Hastings. The meeting had been called by the mayor in response to an offer by the Rev WC Sayer-Milward to grant 12 acres of his ground on the East Hill at a very nominal rent. The key campaigner was the “clever caricaturist” Harry Furniss, who had done much work before the meeting. He was the first speaker, saying “in an able and humorous speech” that golf was becoming increasingly popular in fashionable circles, and he was surprised links had not been established in Hastings long ago. He had many friends in London who would join the club and come to Hastings. “Golfers would only come in the winter, and not in the summer, when the ‘cheap tripper’, who was ruining Hastings, could have the hill to himself.”

On leaving Punch Furniss brought out his own humorous magazine Lika Joko, but when this failed he moved to America where he worked as a writer and actor in the fledgling film industry.  In 1912-13 he worked as a film writer, actor, and producer for Thomas Edison in New York City and London; Our Lady Cinema (1914) outlined his hopes for that art.  In 1914, he pioneered the first animated cartoon film for Thomas Edison.