He died on 12th March 1915 and was buried at Hastings with full military honours.  His grave is in the Commonwealth War Graves Section in the cemetery.

By 1911 they were living in Bexley Cottage, Coburg Place where they were still living at the time of Cecil’s death in 1916. They had had another child Rosetta who was 9, and 9 of their 11 children were still living.   By now Albert and his son Ernest were listed as general labourers and Agnes as a laundress. A Dolly Smith aged 13 was also living with them but her status is illegible.  (CWG records give address as 32, Vicarage Rd., West Hill)

By 1911 Cecil had already enlisted in the Army (at Gosport) and was living in barracks at Chichester with the Royal Sussex Regiment.  At the time of his death in Newcastle he was a corporal in the Royal Horse Artillery/Royal Field Artillery No. 1 ‘A’ Reserve Brigade.

ARTILLERYMAN BURIED WITH MILITARY HONOURS.
A promising military career has been cut short by the death of Corporal Cecil Galloway, Royal Field Artillery, son of Mr. and Mrs. Albert Galloway, of Bexley Cottage, Cobourg-place, Hastings. Corporal Galloway succumbed to a sudden attack of pneumonia while at Newcastle. He began his military career with the Sussex Special Reserve, and transferred to the R.F.A., where he was with his brother-in-law, Sergt.-Major Williamson, a Belfast man, who is now a warrant officer of one of the R.F.A. Brigades.

On the 20th September, his twenty-first birthday, he was wounded in the Battle the Aisne.  A shell burst near him, taking away part of his right ear, wounding his brother-in-law in the back of the head, and killing five others. Galloway was sent back to England, but had resumed duty as soon as possible. He had been mentioned in despatches, had received the Distinguished Service Medal, and was recommended for the rank of Sergeant.  He was a qualified gun-layer and was most enthusiastic.

As a youth he was in the Fishermen's Church Choir. When in the Riding Academy at Woolwich he gained top marks, and was presented with a whip. He was on the point of returning to the Front.

The funeral took place with military honours on Wednesday at St. Clement Church. The Rev. H. C. B. Foyster officiated. The Royal Sussex Regiment furnished the firing party and escort, and their Band attended. Captain Dawson was in command. The drums were covered with crape. Crowds of people witnessed the impressive scenes outside the church. The parents and other relatives followed. 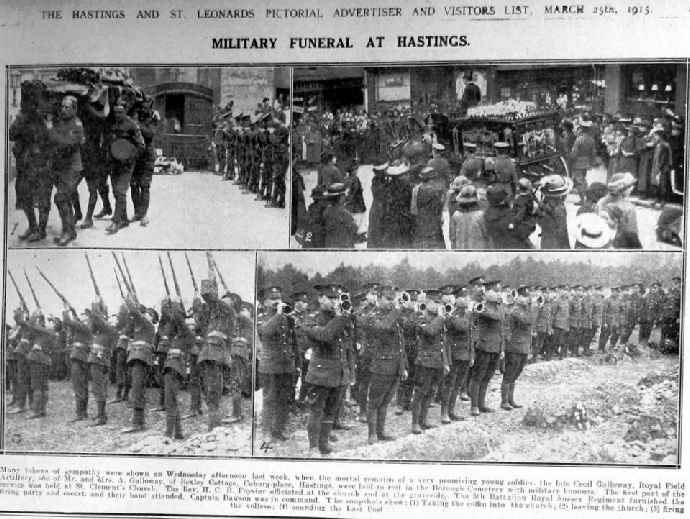