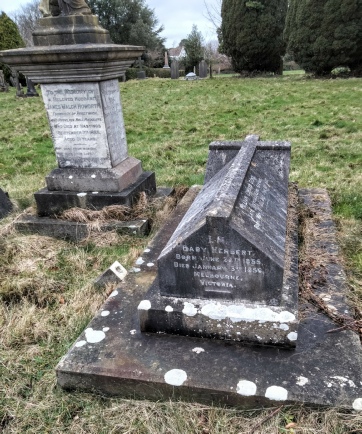 Daughter of the late

William Edward Gedge was born on the 17th May 1812.  Resident for twelve years on the Gold Coast, as a merchant at Cape Coast Castle, Anamaboe and Accra.  He wasx General Commandant of the fort of Anamaboe for four years, from 1833 to 1837.

1840 -LETTER of the Merchants at Cape Coast Castle to Mr. President Maclean. W E Gedge is one of the signatories.

He acted as a magistrate in and around Anamanoe for eight years.  At an enquiry he said he had not had an legal education but "benefited from such law books as as IO may have had by me at the time." (Evidence given to the Select Committee on West Coast of Africa 1842.   [P. P. X2,1842, evidence of W. E. Gedge]

(There was another William Edgar Gedge, married to an Emily during the same period. It has not always been clear which is which, so we have not been able to find a precise date for their departure to Australia.  It has not been possible to ascertain which Gedge couple were staying at Denmark Place with William Belcher Rumsey in 1881.)

Having arrived in Melbourne William became a landing waiter at H.M. Customs, Since the early days of HM Customs, the junior officers stationed in a port had been called Waiters. By the 17th century, there was a distinction between Land-waiters, who had largely taken over from the Searchers the job of supervising the unloading of imported goods and then examining them.

The Argus (Melbourne, Vic.) Thu 24 Apr 1862
STEALING WEARING APPAREL. —Robert Walker pleaded " Guilty" to stealing two coats, the property of Mr. W. E. Gedge, a landing-waiter in Her Majesty's Customs, from the office of the prosecutor, and was sentenced to three months' hard labour.

The Argus (Melbourne, Vic. ) Wed 7 Dec 1864
On a second chargp, prisoner was accused of stealing tobacco from No. G Customs Shed,on the Australian Wharf, on the night of Fridov, 25th nit.

W. E. Gedge, landing-waiter to the Customs, deposed he was at No. G Shod on the 26th nit. Tho boxes, which were now produced broken in coutt, woro then entire in the shed, and contained tobacco. The next day he fonnd, on going into tho shed, that the threo boxes were broken opsn and their contents stolen. Entry had been effected thiough the floor by boring and sawing from beneath.///

The Argus (Melbourne, Vic) Wed 26 Feb 1873
GEMMELL, TUCKETT, and Co. have received instructions from W. E. Gedge, Esq. (who is leaving for England), to SELL by AUCTION, at his residence,Waterloo-street, St. Kilda, on Monday, 10th March, at eleven o'cloc,  All his superior household furniture and effects, ........

1873 Sailed from Melbourne to London

"VICTORIAN PENSIONERS.
The following is a return of pensions chargeable upon the revenue of the colony of Victoria for the year ended 30th June 1875. The list gives the offices which the pensioners held:— W. E. Gedge, £242 10s, Landing-Waiter, Customs;