In Loving [?] Memory of Lucy S A Giffard

Lucy Sophia Ada Giffard was born at Chillington Hall, (Chillingtonhall.co.uk/the-estate) in Staffordshire circa 1845.  She was the great granddaughter of William Courteney, 2nd Viscount Courteney of Powderham Castle in Devon.

She had an elder sister, Charlotte Josephine, who married William Reginald Joseph Fitzherbert Herbert , and a younger sister, Barbara Agnes Caroline, born in 1848 (shows as the only offspring in some online records).  She married Vincent Thomas Eyre in 1873.

It is believed she lived most her adult life in the South of England, apparently attended by two Quaker sisters, who were trained nurses.

There is a record of a minor family legal matter, in which she, along with her sisters, and brothers-in-law, was represented by a local [Staffordshire] solicitor.
1873 - Lucy Sophia Ada Giffard spinster, a person of unsound mind by James Wyley (a beneficiary under her father’s will) and Edmund Mallet Vaughan her Committees https://discovery.nationalarchives.gov.uk/details/r/C7912736

The probate record for Lucy records her address as Keena House, 84 Lower Park Road with Dr Harvey Baird.  It was Dr. Baird’s home, but he also had some patients there.  It nearly burnt down in December 1921, when the building next door caught fire, and the report reads ‘A number of patients of Dr Harvey Baird were removed, during the fire, to rooms away from the outbreak.’

Letter of thanks to the Fire Brigade by Doctor Baird. 1921
I also think much praise due to the two nurses (Nurses Leaves and Jakeman), the latter of whom first noticed the fire, for the calm manner in which they removed the three resident patients to a room likely be safe.

Dr. Baird wasn't at Keena House [left] until 1919, so where might Lucy might have been prior to this. There is obviously no guarantee, but taking the circumstances into account, this seems a possibility. (From a newspaper article on vanished hospitals in Hastings.)

No 117 was purpose-built and opened in 1889, surviving until the second war with its function discreetly obscured and street directories simply listing it as ‘Westcliffe’, occupied by the doctors Newington. It was in fact an annexe of, what was called a Lunatic Asylum, or private madhouse (in the days before political correctness), based in Ticehurst since 1792 under four generations of Newingtons as doctors.  After the war it was absorbed into the Eversfield Hospital complex and is now apartments. 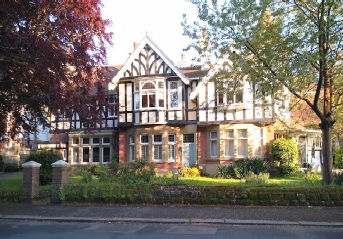