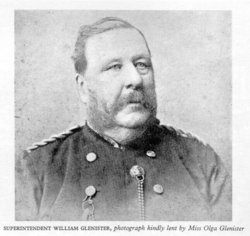 William Montagu Glenister had joined the Metropolitan . Police, aged 16, and rose to Acting Inspector .   He served in the Detective Department  attached to the Great Western Railway.

He was 30 years old when he came to Hastings.  In the 1861 census he and his wife Kate, had six children and by the 1871 census, ten, including twins.

Great Western Railway)  as Inspector of the Hastings Borough Police.  He took up the post on 7 June 1856 at a salary of £120 per annum. He passed through a probationary period, and in September 1857, his designation was changed to Superintendent, and his salary was increased to £135 per annum.

In October 1858, he reported to the Watch Committee that he been presented by the tradesmen of the borough with a gold watch and chain "as a token of their satisfaction for his exertions in carrying out his office".  The acceptance of the gift was approved, and the Committee had much pleasure in recording the "lucid manner" in which the first annual report of the state of crime in the borough had been prepared and presented by the Superintendent.

In recognition of his efforts and the way in which he had reorganised the force, turning it from a collection of half trained men to a well drilled and well equipped force, he was subsequently referred to as "The Father of the Hastings Police Force".

On the occasion of 25 years of service, the inhabitants of Hastings showed their appreciation of his work and their high esteem and respect in which they held him, at a banquet held in his honour at the Queens Hotel, with a handsome illuminated address and a cheque for £400.

Up to 1883 he was known as Superintendent Glenister, but when the Hastings Improvement Act came into force that year, his title was changed to Chief Constable, making him the first holder of that office. As part of his official duties he escorted a number of royal visitors to Hastings, and received gifts marking such occasions from Emperor Frederick of Germany, Empress Edgamie, and the Prince Imperial.