On the 1881 census Alphonse appears to have retired.  He is shown as Member of H M Household at St James’s Palace in London.  Daughter Leone aged 49, a spinster, is living with him and they have one servant. Son Alphonse and his wife are living at 74 Lambeth Road, Southwark and he is a commercial clerk-shipbroker.

The Royal Cookery Book written by Jules Gouffe and adapted and translated into English by Alphonse appears to have been published in 1883 when Alphonse is 69 years old.

There is no trace of Alphonse senior or Leone on the 1891 census but his son and his wife are still shown as living at 74 Lambeth Road, Southwark and Alphonse junior is still a ship insurance broker.

1901 sees Alphonse aged 87, a widower living on own means at 128 Warwick Street, Hanover Square. Leone, aged 60, is still with him and they have one servant.  Son Alphonse Alexander and his wife are still in Lambeth and Alphonse junior is still a ships' insurance broker.

By 1911 Leone is living on her own means at Mougiron, 3 Princes Road, St Leonards on Sea.  She has one servant living with her.  She dies in 1932. and is buried in the family grave at Hastings cemetery. 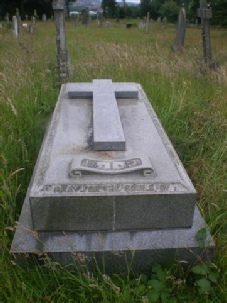 Alphonse Alexander is shown on the 1911 census living at Lisieux, Downs Road, Hastings with his wife and is now retired.  He dies on 22 February 1931 and his wife Eliza dies in 1939 aged 90.  Both are also buried in the Hastings plot.The inscription on the grave reads:

Along the base....Pray for the souls of

This is where the family of Queen Victoria’s head pastry chef ends.