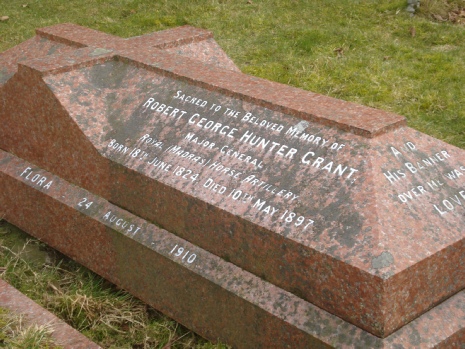 Sacred to the Beloved Memory of

Major-General Robert G. H. Grant, whose death is just announced, belonged to the Royal (Madras) Artillery.  He served in Bundelkhand and in the Saugor and Narbada territories in 1842, and was at the capture of Kirapur.  The deceased officer, who was 72 years of age, retired twenty-five years ago. - The Colonies and India Details

Flora had an interest in botanical art and took an interest in orchids. She was also an excellent guitarist.  Around 1845 the Jerdons lived in their Ooty home Woodside, (Woodside originally belonged to General Watson) and their children were baptised at the local St. Stephens church.

We regret to have to record the death, at her residence, 40, Marina, on the 24th August, of Mrs. Flora Alexandrina Matilda Jerdon, widow of the late Dr. Jerdon, of the Madras Medical Service, at the age of 81 years.  The funeral took place on Monday the Borough Cemetery. The Rev. Sholto J. H. Newman officiated.

Impatiens jerdoniae was named after Flora Jerdon by Robert Wight